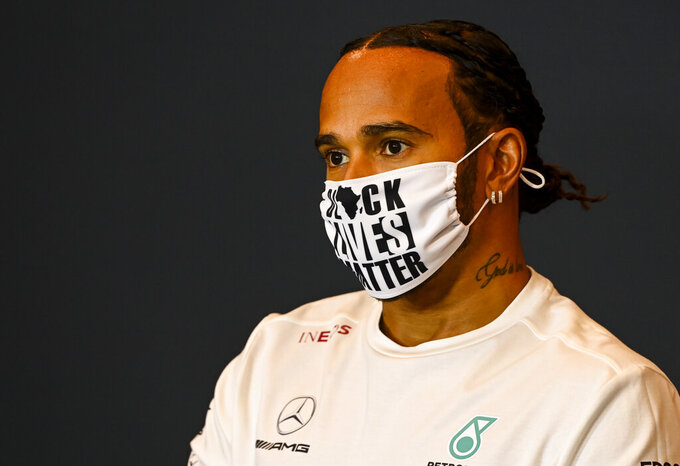 Mercedes driver Lewis Hamilton of Britain wears a protective face mask as he attends a media conference ahead of Sunday's Emilia Romagna Formula One Grand Prix, at the Enzo and Dino Ferrari racetrack, in Imola, Italy, Friday, Oct. 30, 2020. (Mark Sutton, Pool via AP) 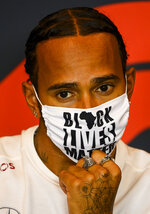 Lewis Hamilton was a nine-year-old karting driver when he learned his idol Ayrton Senna died after crashing into a concrete wall during the 1994 San Marino Grand Prix.

More than a quarter of a century later, Hamilton still has vivid memories of when his father broke the news as the pair repaired his kart.

“I remember I had to walk away from my dad, because my dad would never let me cry in front of him,” Hamilton said on Friday while preparing for his first Formula One race on the Imola track where Senna lost his life.

“I had to go to a different place and it was not so easy,” Hamilton added, his voice quavering with emotion.

“But I remember trying to challenge that sadness into adrenaline and I think I won that weekend. But the following weeks were tough.”

This weekend’s Emilia Romagna GP marks the first F1 race at Imola since 2006, when Hamilton raced in GP2 at the circuit. He returns as F1's new holder of most grand prix wins, after eclipsing Michael Schumacher last weekend by winning a record 92nd race in Portugal.

Austrian driver Roland Ratzenberger was also killed during the 1994 race weekend in a high-speed crash but Senna was a three-time F1 champion and considered among the series' greatest drivers.

“It’s just something we’ll always remember,” said Hamilton, who was given one of Senna's race helmets by Senna’s family at a Brazilian GP. “I went around today and it was a really special lap just going around seeing this historic track, passing the hard reminder of where Ayrton crashed.

“It is very surreal still for me when I go to places, where you drive through the tunnel in Monaco or you drive at the British GP where you know that the greats in the past have raced at those places,” the Mercedes driver added. “That’s heartwarming to know that I was able to be here and do what he was doing 26 years ago.”

Mercedes can clinch a record seventh consecutive constructors’ title on Sunday unless Red Bull outscores it by 34 points -- something Red Bull hasn’t done in more than four years.

“I remember when we debated in 2014 internally what we could set as a target,” Mercedes team principal Toto Wolff said. “And we said, ‘Winning a championship would be fantastic.’ And (engineering director) Aldo Costa said, ‘We are not ambitious enough. We should write down that our aim is to win multiple championships.’

“If someone would have told us back then that it would be seven I would have clearly thought he would need some support. And here we go, we have achieved it.”

Inserted into the revised calendar due to the coronavirus pandemic, this race will be held with an abbreviated format.

No practice was held on Friday, leaving only one practice session on Saturday before qualifying.

No fans will be allowed in due to rising virus cases in Italy.