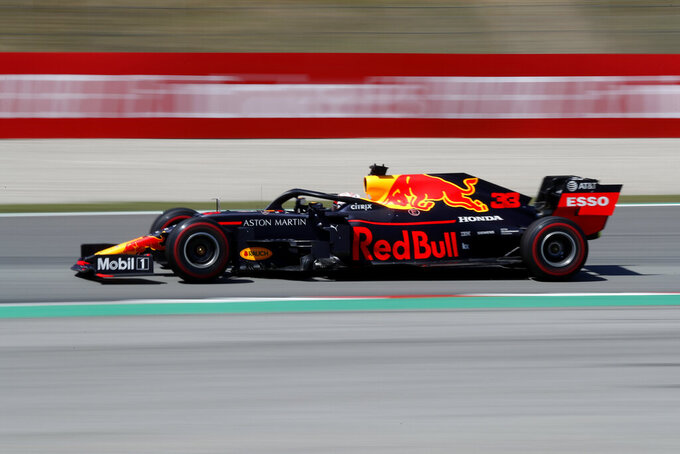 Red Bull driver Max Verstappen of the Netherland's steers his car during the Spanish Formula One race at the Barcelona Catalunya racetrack in Montmelo, just outside Barcelona, Spain, Sunday, May 12, 2019. (AP Photo/Joan Monfort)

MONTMELO, Spain (AP) — Ferrari has a fight on its hands. Just not the one it wants.

Red Bull is threatening to replace it as Formula One's next-best team behind a dominant Mercedes after Max Verstappen outperformed Ferrari's drivers at the Spanish Grand Prix.

That allowed the Red Bull driver to move past Ferrari's Sebastian Vettel into third place overall with 66 points to Vettel's 64. Hamilton and Bottas are far in front with 112 and 105 points, respectively.

"I knew we could take the fight to Ferrari," Verstappen said after being cheered by the large number of Dutch fans who had come to the race decked in orange T-shirts.

Verstappen and his supporters have good memories of the Barcelona-Catalunya Circuit. His win here in 2016 made him F1's youngest race winner at age 18.

While another victory was out of the question given Mercedes' pace, Verstappen didn't have too much trouble staying in front of the Ferraris.

"We were close to Ferrari in qualifying," he said. "I am happy to be back on the podium and third in the championship. It is good to close the gap."

Ferrari was faster on this same track during two weeks of preseason testing this winter and had brought in a new engine for the race.

But Mercedes was unfazed and stormed to a fifth one-two finish in as many races to further demoralize its rivals.

Vettel tried to get the jump on the Mercedes at the race start from third on the grid.

But the move only succeeded in making Bottas flinch and letting Hamilton go clear. After Vettel's tires locked up, Verstappen slipped past into third place.

Even though there are 16 races left, it looks like Ferrari will likely have to wait another year to end its constructors title drought that dates back to 2008.

"The updates we brought here to Barcelona, both on the aero front and on the engine, worked well and we are more than pleased with them, but they proved to be insufficient," said Ferrari team principal Mattia Binotto. "Now we have to analyze and think about what did not work. And when it comes to that, as of today I don't think we have a precise answer."

As for Hamilton, he said he had taken notice of improvements that Red Bull had made after switching to a Honda engine this season.

The defending champion also said he missed a better effort from Ferrari.

"We welcome a battle and it would be great to fight with Ferrari and Red Bull," said Hamiton. "I prefer it when they are in the mix with us. It is much better when we can compete with another team."