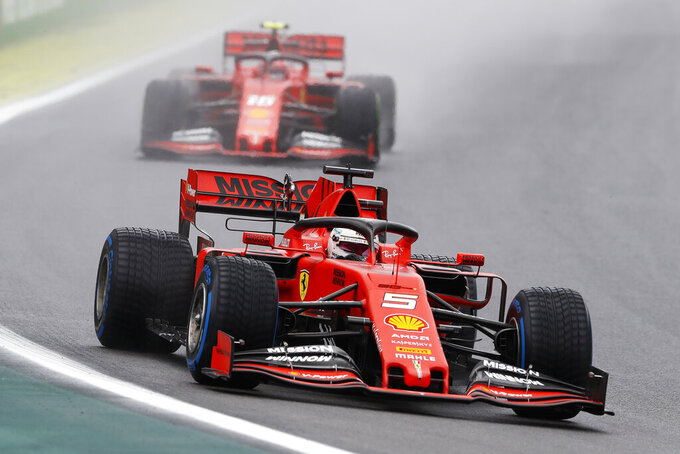 SAO PAULO (AP) — Sebastian Vettel and Charles Leclerc dominated practice at Interlagos on Friday for the Brazilian Grand Prix, giving Ferrari some relief after a poor race in the United States this month.

Vettel clocked the fastest lap of the day in the afternoon session, and Leclerc was only 0.021 seconds behind.

“The car was decent today, but we can improve. I am confident of a step forward,” Vettel said. “There are a lot of small things (to adjust) and we need to make sure we nail those.”

The four-time world champion was sure the other teams will be faster in Sunday’s race.

Ferrari vigorously celebrated its drivers after practice. The first day of racing at Interlagos marked a recovery somewhat for the team after a poor United States GP this month, when Leclerc finished almost a minute behind race winner Bottas and Vettel retired early.

The encouraging practices at Interlagos also helped Ferrari to answer Verstappen’s accusation that it was “cheating” in the making of its engine.

The Red Bull driver suggested on Dutch TV that Ferrari’s performance dipped in the U.S. because of a FIA directive on fuel flow systems.

Vettel had already called Verstappen’s comments “not professional” and “not mature,” and on Friday — without naming the Dutch driver — he added they were “sad.”

“The main thing for us is to focus on ourselves and hopefully give the right answer on the track,” Vettel said.

Verstappen avoided the controversy with Ferrari and called his team’s practices at the Brazilian GP “messy” due to weather conditions.

“Today is not really representative with the temperatures,” Verstappen said. “I can’t really tell where we are exactly, but I also don’t think it matters a lot. Tomorrow will be different.”

Thai driver Alexander Albon was the fastest in the morning practice in the rain. His Red Bull was half a second ahead of Bottas until he crashed on the final corner and the session was suspended. Albon was unharmed.

The Brazilian GP on Sunday is the penultimate race of the season. Hamilton secured the season title, his sixth, in the previous race in the U.S.