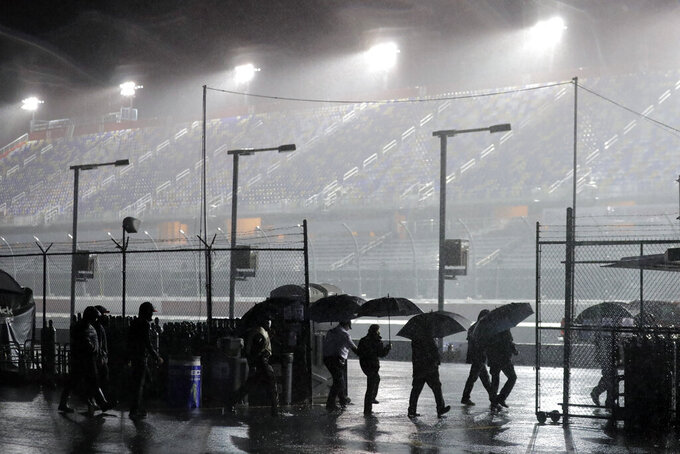 People leave the infield at Darlington Raceway after the NASCAR Xfinity series auto race was postponed because of rain Tuesday, May 19, 2020, in Darlington, S.C. (AP Photo/Brynn Anderson)

DARLINGTON, S.C. (AP) — Noah Gragson couldn't wait to get back to Xfinity Series racing at Darlington.

Instead, he and the rest of the competitors will have to wait until Thursday after heavy rain postponed the series' first race since March, when the coronavirus pandemic shut down sports.

“After two months of waiting, what's another couple of days?” Gragson said.

NASCAR officials called the race about two hours after the scheduled 6 p.m. start. The event is now set for Thursday at noon.

The track was dry and fast until the rains hit about 4 p.m. The storms increased and lessened several times during that stretch and NASCAR had Air Titans out at least three times when it looked like things might clear.

In the end, it was too wet to continue during one of the busiest weeks in Darlington history. It started Sunday with the NASCAR Cup Series' return to racing and will continue when those racers are back on the track for a rare midweek event Wednesday night.

Gregson, the series points leader who'll start on the pole Thursday, acknowledged he was anxious about racing at Darlington without practice laps or fans in the stands. He walked around the track earlier Tuesday to get a reminder of what it was like.

“It's going to be really difficult,” Gragson said. “We saw some guys in the Cup race who were pretty tame at the start and other guys who were pretty aggressive. That's what I'm nervous of.”

Kevin Harvick won the Cup event on Sunday for his 50th victory in the sport's top series. Cup drivers are scheduled to run again at Darlington on Wednesday night, although forecasts have called for additional rain. NASCAR hasn't raced on a Wednesday since Richard Petty won his series-leading 200th race at Daytona on July 4, 1984.

If that race gets postponed, it would move to Thursday night, setting up a same-day doubleheader in a season like no other. NASCAR would likely inspect the Cup cars on Wednesday, then stagger the arrival times for Xfinity and Cup teams on Thursday.

Thursday's Xfinity race will be the first in the series since March 7 at Phoenix.

All drivers, teams and essential personnel were screened at the track before being let in. All cars passed pre-race inspection. Now, they'll have to wait and hope for better weather.

The 21-year-old Gragson said he spent much of the rain delay playing Xbox and keeping to himself.

Once he fires up the engine, it will be racing as usual, no matter how long he's been away.

“Still a lot of butterflies,” he said. “But once I get that helmet on and make a lap around this place, get back to that rhythm and feel comfortable again, it will feel natural.”