In The Pits: Action Express lifts curtain at Road Atlanta 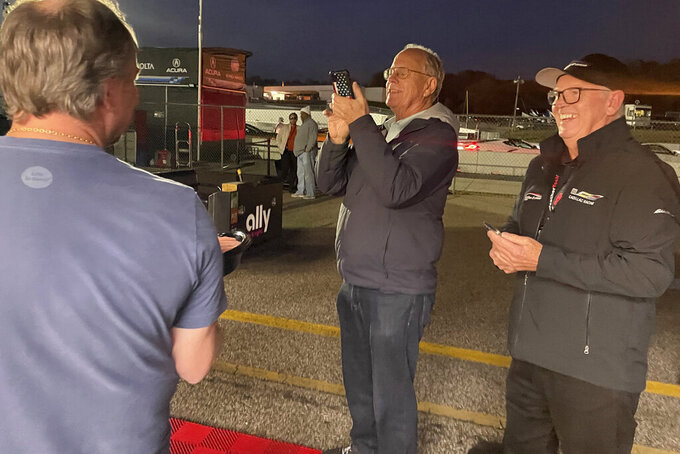 Jim France, center, chairman of both NASCAR and the IMSA sports car series, takes a photograph of Brazilian steaks being grilled at Road Atlanta in Braselton, Ga., on Friday, Nov. 12, 2021. France is owner of Action Express Racing, which competed in the Petit Le Mans last weekend at Road America. (AP Photo/Jenna Fryer) 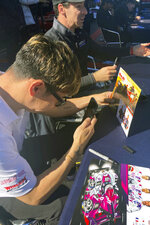 BRASELTON, Ga. (AP) — Jim France, chairman of both NASCAR and the IMSA sports car series, mingled in the darkened paddock at Road Atlanta as a group of Brazilians cooked picanha on a pair of charcoal grills.

Mike Conway, a week removed from winning the World Endurance Championship, and Pipo Derani, the night before his own run for a title, served the sliced steak on paper plates that France and everyone else ate with their hands.

“This meat is terrible!” France yelled to the chefs. “I'm going to need you to pack it all up and I'll take it up to my bus and throw it out for you.”

France is also the owner of Action Express Racing, which went to the Petit Le Mans outside Atlanta with two headline-making cars. The No. 31 Whelen Engineering Cadillac had trailed in the standings since rival Wayne Taylor Racing won the season-opening 24 Hours at Daytona, but three wins in five races had pulled Felipe Nasr and Derani within 19 points heading into the title-deciding 10-hour race over the weekend.

The second car is fielded in conjunction with Hendrick Motorsports, seven-time NASCAR champion Jimmie Johnson and Ally, the sponsor of the Cup Series' No. 48. In IMSA, the No. 48 Cadillac is a “star car” in that its roster is stacked; a star car usually only runs at Daytona, but Johnson, Indianapolis 500 winner and IndyCar champion Simon Pagenaud, and Kamui Kobayashi, who teamed with Conway to win the WEC title, ran all four IMSA endurance races this season.

Action Express gave The Associated Press behind-the-scenes access at the Road Atlanta, where team manager Gary Nelson pulled back the curtain on one of the most prominent programs in North American sports car racing.

The No. 31 won three consecutive championships from 2014-16 and two of the last four, including Saturday night when co-drivers Nasr and Derani teamed with Conway to win the Daytona Prototype international championship. The title fight came down to the final turn, with Nasr holding off Ricky Taylor to finish second, the one place ahead of Wayne Taylor Racing it needed to be to win the crown. It was essentially a head-to-head competition between the two cars.

Nasr had already informed Action Express he was leaving at the end of the season — he's expected to be named a Porsche factory driver for Team Penske — and he broke down in tears after winning the pole on Friday night because of the impending farewell.

On a golf cart ride back to the team tent in the paddock, France assured Nasr he'd always be part of the Action Express family. When the golf cart arrived, various Brazilian meats were already sizzling — a sort of celebration for Nasr and Derani, who are both Brazilian, and the entire team.

In the middle of all this was the 77-year-old France, who took cell phone photos, checked a text message from team owner Rick Hendrick, chatted with various team members, lauded sponsors and gushed about the energy at Phoenix Raceway one week earlier. NASCAR crowned three series champions after three compelling, winner-take-all races — the season finale was sold out — during what France called “a hell of a good weekend.”

Although he owned almost everything around him — IMSA also owns Road Atlanta, NASCAR owns IMSA and the France family controls all of it — France was at the dinner as a fan.

He's at nearly every race — Cup and IMSA — but you'd probably never know it. France is quiet and hangs around the fringes, never front and center. This is despite France having his most public role with the behemoth of American motorsports founded by his father in 1948, ever since he replaced his nephew, Brian, as chairman in August 2018.

France loves racing and loves being at the track, and although he mingled with Action Express, Nelson insisted there is a clear separation between the team and France as the series owner.

Chad Knaus, former crew chief for all seven of Johnson's NASCAR championships and now the vice president of competition for Hendrick Motorsports, calls the shots for the No. 48. Tim Keene, an engineer and Action Express performance coordinator, calls strategy for the No. 31 while technical director Iain Watt sits between Keene and Knaus advising both while keeping the two-car program aligned.

The No. 48 wanted to win the race — Johnson's last points-paying win was in 2017, and the Petit Le Mans was his last chance to end the losing streak in 2021 — but not at the expense of the No. 31 winning the DPi championship. In qualifying, the overall goal was to get the No. 31 on the pole and the No. 48 to qualify ahead of Wayne Taylor Racing. But Kobayashi blew a turn for an early end to the No. 48's qualifying run.

Kobayashi, a former Formula One driver, two-time Rolex at Daytona winner and reigning winner of the 24 Hours of Le Mans, apologized for his run in a debrief.

“I was proud of you, it's your first time here,” Nelson replied. “We ask you to do a lot, buddy.”

“Yeah, I know. But I think if not for my misjudgment, if we had stayed on the track, we could have been maybe P2,” Kobayashi replied.

They indeed did ask a lot of Kobayashi, who carried the load for the No. 48 by logging more than half the drive time over the 10-hour race. The No. 48 didn't contend for the win and finished fourth, but when Nasr held off Ricky Taylor at the finish line for second-place, the entire pit stand erupted with both Action Express teams celebrating together.

Wherever France was watching at that moment, his reaction was no doubt more muted.