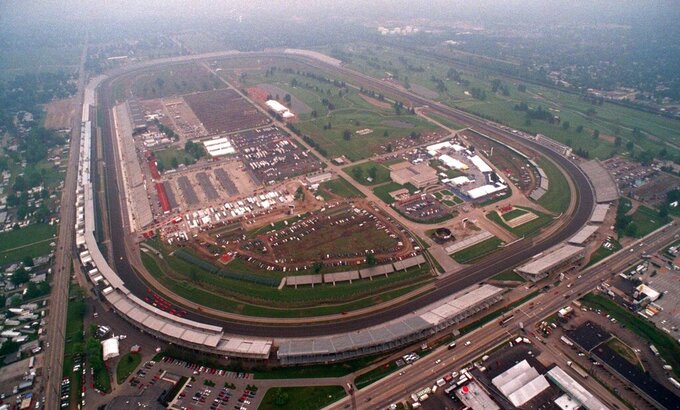 FILE - In this May 24, 1996, file photo, a cloud hangs over the Indianapolis Motor Speedway in this photo taken from the Goodyear blimp. Turn one is at the lower left. Indianapolis Motor Speedway and the IndyCar Series have been sold to Penske Entertainment Corp. in a stunning announcement that relinquishes control of the iconic speedway from the Hulman family after 74 years. (AP Photo/ John R. Fulton Jr., File ) 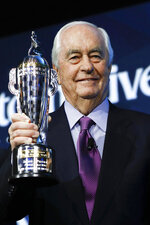 Roger Penske was a car-loving, 14-year-old who regularly listened to the Indianapolis 500 on the radio when his father landed tickets to the 1951 race. They made the trek from Cleveland, and Penske fell in love when he saw the cars zipping around Indianapolis Motor Speedway.

Now he owns the iconic speedway, its hallowed grounds, "The Greatest Spectacle in Racing," the IndyCar Series and all its properties in a stunning deal announced Monday. By early next year, Penske Entertainment Corp. will take over all those entities owned by the Hulman family for 74 years in one of the biggest transactions in the history of motorsports.

"The bug of motor racing got in my blood," Penske recalled about that day with his father, Jay. "I hope my dad is looking down at me and this group and saying 'Son, you did a good job.'"

The sprawling, 110-year-old speedway and its famed, 2 1/2 -mile oval track is one of the most famous venues in sports, and crowds for its showcase race every May, the first one dating to 1911, used to swell to more than 400,000 people. The speedway with its famous pagoda tower, Gasoline Alley garage area and massive grandstands was a dilapidated mess in 1945 when Tony Hulman bought it and brought racing back to the corner of 16th Street and Georgetown Avenue after a four-year absence following World War II.

The speedway itself spun off multiple subsidiaries, including the IndyCar Series and Indianapolis Motor Speedway Productions, which also are being acquired by Penske Entertainment, a subsidiary of Penske Corp.

Experts were unsure how to value the deal and Penske quipped to AP: "I haven't paid anything yet." But the sale was a bombshell in an industry that has struggled with declining attendance and interest over the past decade.

"IndyCar has had a good few years but motorsports still has this challenge going forward," said Andrew Baker, director of motorsports studies at IUPUI in Indianapolis, whose campus is just a few miles from the speedway. "What people don't realize is how much it is on the business to business side. That's where Roger can help, is essential to the sport. It can spill over into things like hospitality and then they can use that to schmooze people and businesses and bring more sponsors into the sport."

The deal was done in roughly six weeks. It began when Tony George, grandson of Tony Hulman, approached Penske before the season-ending race in California in September. George wished Penske luck in the championship battle, then asked "The Captain" if they could have a conversation about the speedway.

"We as a family agreed we all needed to have a conversation with Roger Penske," George said.

"I simply said I'd like to meet with him and talk about stewardship and he got a very serious look on his face," said George, who several times choked back tears discussing his family's legacy. "It's obviously emotionally difficult. We all love it and we all care deeply. We all realize that as a family and organization we had probably taken it as far as we can. Roger Penske's resources will only take this to another level."

Tony George, along with his sisters and the Hulman & Co. board of directors, have most recently been in charge of Hulman properties. Mari Hulman George, Hulman's daughter and matriarch of the family interests, died last November and the family businesses have slowly been divested. Hulman & Co. sold its other primary business, the baking company Clabber Girl, to B&G Foods for $80 million in May.

The family has now turned its racing properties over to Penske in an announcement made one day after the one-year anniversary of Hulman George's death. The family has an opportunity to remain involved with both the series and the speedway, and Tony George said he will take Penske up on the offer. He is also co-owner of Ed Carpenter Racing, the team run by his stepson.

Penske said he will step down as race strategist for his IndyCar team — he most recently called races for veteran driver Will Power — and focus on turning IMS into "the entertainment capital of Indiana." He said the heavy lifting begins Tuesday when Penske plans to walk the IMS property — it includes the track, a golf course, a museum and in 1987 was designated a National Historic Landmark — then meet with the existing executive team.

Penske, who is also a giant in the NASCAR stock car series, said he plans to make no management changes at this time. He was eager to address any potential conflict of interest that could arise from the most powerful man in motorsports owning a three-car race team, the series and one of the most important races in the world.

"I understand the integrity. To me, I know what my job is," Penske said. "Hopefully I have enough credibility to ensure that there is not a lot of conflict. I've got a lot of guys watching me."

Penske, who turned 82 in February, received the Presidential Medal of Freedom from President Donald Trump last month. He is the winningest car owner in Indy 500 history with 18 victories, including Simon Pagenaud's win in May, as well as 15 IndyCar championships following Josef Newgarden's title in September.

The deal should close in January. Penske said because both Penske Corp. and Hulman & Co. are private companies they are not legally required to disclose the transaction price.

IMS earlier Monday sent a document to IndyCar teams, a copy of which was obtained by the AP, outlining the basics of the deal.

"We have found the ideal steward of the company and its iconic assets," the document said. "Penske Corporation — with its 64,000-plus employees and more than $32 billion in consolidated revenue — will bring tremendous energy, leadership and resources to IMS, IndyCar and IMSP."

Support from rival team owners was immediate. Chip Ganassi said Penske called him early Monday before the sale was announced to inform him, adding "the place is going to be run like a business now."

Michael Andretti called it "positive news" for the speedway and the series while Bobby Rahal called Penske the "perfect custodian."

Penske has missed only six Indianapolis 500s since that first race with his father, and five of them came when the IndyCar Series was formed by Tony George and split from CART. Penske teams remained in CART, and CART teams were not welcome at the 500. CART was once the most popular form of motorsports in the U.S., but NASCAR swallowed open-wheel racing during the tumultuous times after Tony George created the Indy Racing League. The split fractured open-wheel racing in North America and it has never fully recovered even after CART conceded and merged into what is now known as IndyCar.

Penske said he is eager to add events to IMS and explore opportunities for the speedway and the series. He has been open to new ideas, including guaranteeing spots in the Indianapolis 500 field to full-time IndyCar teams. Fans are vehemently against the idea and argue the show is enhanced by the trials of a driver trying to qualify for the event.

Penske said it was too soon to comment on guaranteeing Indy 500 spots, but he wants to discuss bigger and bolder visions.

"We've got to break some glass on some of these things," said Penske, who mentioned 24-hour races, a return of Formula One and an increased relationship with NASCAR, which has raced at the speedway since 1994, as items he wants to study.

"We've got to try some things. I am prepared to take a risk. No risk, no reward."