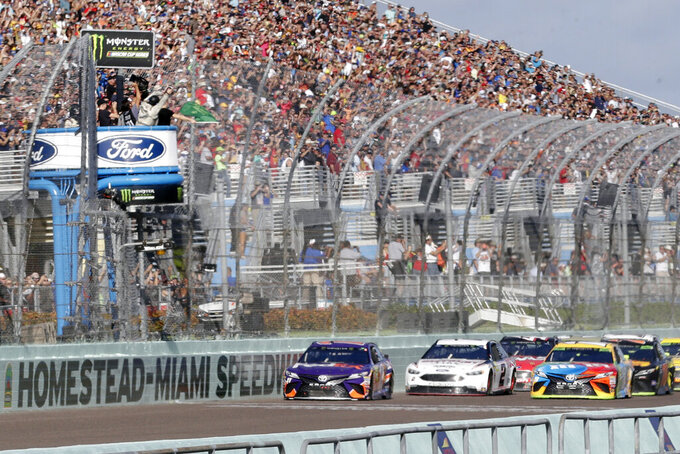 CHARLOTTE, N.C. (AP) — NASCAR plans to reschedule the seven Cup Series races already postponed due to the COVID-19 pandemic. Figuring out how to cram the events and the All-Star race into the crowded 36-race schedule could be difficult.

NASCAR has already postponed its season until May 9 at Martinsville Speedway in Virginia. IndyCar suspended its start to the season through the end of April last week, while Formula One has postponed or canceled several events, including last weekend’s opener in Australia.

“These clearly are unprecedented times with information changing by the hour,” NASCAR President Steve Phelps said Tuesday. “Collectively, our industry has made several difficult decisions, all with one thought in mind -- the health and safety of our fans, our competitors, employees and everyone in the industry. The situation we are facing transcends the world of sports. What is most important now is we take precautions to keep everyone as safe as possible during these challenging times.”

Motorsports is in a particularly perilous position without weekly racing because of its financial structure. Teams must find the sponsorship needed to field each car, pay drivers, make payroll for an entire organization and cover additional operating costs. With no events scheduled until May, sponsors may ask for refunds and teams won’t be collecting payouts from purses.

Roger Penske, who in January became owner of IndyCar and the Indianapolis Motor Speedway, promised team owners they will receive the first installment payment from the series’ bonus program as planned.

Phelps said NASCAR is still working through those issues.

“We are working with our teams closely to have them industry wide make sure we are all financially viable moving forward during this postponement of our races,” Phelps said. “Are we concerned about teams broadly and their financial health? Of course we are. We want to make sure that each of our teams gets through this, each of our stakeholders in the industry gets through this crisis as well as we all can.”

As for rescheduling the postponed events -- at Atlanta, Homestead-Miami, Texas Motor Speedway, Bristol (Tenn.), Richmond (Va.), Talladega (Ala.) and Dover (Del.) – Phelps said all options are under consideration. That includes midweek races and doubleheaders.

NASCAR does want the postponed events concluded before the start of its playoffs in September, still wants the season to end as planned at Phoenix in November and isn’t sure if it will race during a planned break during the Tokyo Olympics, as requested by broadcast partner NBC Sports. The Olympics are currently scheduled to open in late July.

“It's understanding the races that we've had to postpone and what is the best way to get them fit back into a schedule,” Phelps said. “Will it be a crowded landscape, television landscape, with a lot of different sports on? Yes, it's going to be. I think, again, we'll work with our television partners to find the appropriate windows so we can get back racing and make sure our fans get the opportunity to see that racing.”

NASCAR has eased the financial burden on teams by banning car tests for now, including time spent in wind tunnels or on manufacturer-owned simulators.

Phelps also sent a letter to fans that stressed the series hopes to return to racing in May.

“It’s the thrill of the race that attracts us to NASCAR and makes us all fans,” Phelps wrote. “But as we look broadly at the coronavirus situation that is rapidly developing in our country and abroad, what is important now is bigger than the world of sports, and we must focus on everyone’s safety and well-being. ... NASCAR appreciates your support and we look forward to going green.”