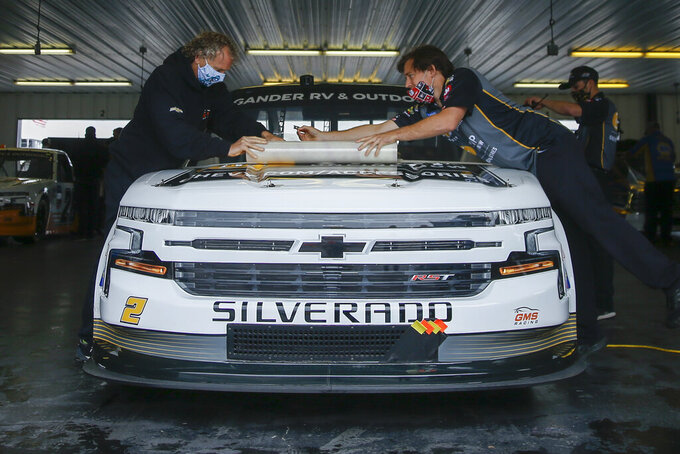 Crew members for Sheldon Creed wrap up the truck after the NASCAR Truck Series auto race scheduled for Saturday afternoon, June 27, 2020, was postponed to the next morning due to weather at Pocono Raceway, in Long Pond, Pa. (AP Photo/Matt Slocum)

LONG POND, Pa. (AP) — NASCAR is set for a tripleheader of racing at Pocono Raceway from three national series on Sunday.

Rain washed out the Truck Series race on Saturday in what was already a packed schedule. Pocono is the site of a Cup Series twin bill, with one race on Saturday, one on Sunday, and the second race comes with a twist. The field for Sunday’s race will be set by inverting the lead-lap finishers from race No. 1.

The rainout forced the Truck Series to run at 9:30 a.m. Sunday, followed by 225 miles of Xfinity racing and a 350-mile Cup race.

The Cup Series race scheduled for Saturday is still on with a 3:54 p.m. green flag start time.