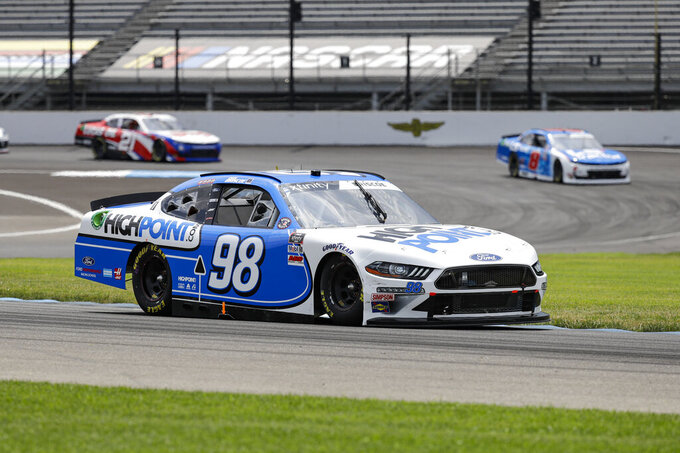 CHARLOTTE, N.C. (AP) — Michael Jordan took his own advice and just did it: Air Jordan formed his own NASCAR team and expects the foundation will be in place to build a stock car Dream Team centered around Bubba Wallace.

Jordan has some company on the celebrity starting grid: Pitbull bought his own piece of a NASCAR team and “Mr. Worldwide” could have fans -- up to 30,000 of them at the Daytona 500 -- shouting “Dale!” at next week’s season opener.

“There’s no better time to be involved in NASCAR,” said Pitbull, who was attracted to the sport by the 1990 movie “Days of Thunder” and is now partnered with new team Trackhouse Racing, which along with Mexican driver Daniel Suarez provides a platform to reach a broader audience.

The fan favorites extend well beyond the owner’s box. Chase Elliott, NASCAR’s most popular driver, is the reigning champion and three-time Daytona 500 winner Denny Hamlin -- who helped usher MJ into the sport -- has kids asking about his PJs in a national commercial tagline he can't shake.

The schedule underwent an overdue overhaul and now has a whopping seven road courses and five new venues. NASCAR is even set for an off-road detour through the dirt at fan-favorite Bristol Motor Speedway.

Perhaps in any other season, NASCAR could raise a glass to what its broadcast partner is billing as “The Best Season Ever.” But promising “best" anything in a pandemic seems as outlandish as a 62-year-old driver — 1990 winner Derrike Cope — in the Daytona 500.

Yet here we are.

While NASCAR can hope the racial reckoning from last season that led to its Confederate flag ban have eased, concerns that it can reach the season finale without interruptions to the schedule and drivers falling ill still linger.

NASCAR last year navigated the pandemic by first filling the free time with nationally televised iRacing and found a way to become one of the first major sports to resume competition in May. It was the first sport to complete its full schedule but got to November only by moving races, running without spectators or limited spectators, and trusting participants to monitor their own health.

NASCAR again won't test competitors in 2021 but plans on having rapid tests at the tracks when needed. The bubble has been widened this season to allow a team owner into the garage for the first time since last March and NASCAR acknowledged it must be “nimble” with its schedule. The second race of the season scheduled in Fontana, California, has already been moved to the road course at Daytona because of pandemic restrictions.

NASCAR executive vice president Steve O’Donnell touted the momentum from a successful 2020 season but acknowledged the pandemic has challenged NASCAR going into 2021.

“I think all of us hoped by this time we’d have full grandstands and be ready to rock and roll for the 500. That's not the case,” he said.

Daytona International Speedway can hold more than 100,000 in the grandstands and thousands more in the infield, but the speedway will be limited to roughly 30,000 spectators for the Feb. 14 season-opener.

Hamlin is seeking to become the first driver to win three consecutive Daytona 500s while also transitioning into team ownership. He still drives for Joe Gibbs Racing but has partnered with Jordan to create 23XI Racing (pronounced twenty-three eleven) and field a car for Wallace, the only Black full-time driver at NASCAR's top level.

Wallace had a tumultuous 2020 as he became NASCAR's face for racial justice and change. He successfully pushed NASCAR to ban the Confederate flag at its events and with it came a wave of backlash from traditional fans. Wallace weathered it as best as he could — even when NASCAR brought in the FBI to investigate a garage door pull in his stall at Talladega that had been fashioned into a noose months earlier — and it ultimately led to a millions in new sponsorship dollars that gave Wallace the funding to help get 23XI Racing off the ground.

He and Jordan become the only Black team owner and driver combination in the sport and the pairing puts Wallace in a glaring spotlight. Winless in 112 Cup races driving for underfunded Richard Petty Motorsports, Wallace knows it is time to deliver.

Wallace is seeking a balance in trying to be successful with a high-profile team while also using his platform to push for diversity. If he can do it all with fewer headaches, he'd be thrilled.

“I lost 7 pounds through everything that happened last year. So much stress and pressure, Lord,” Wallace said. “I have a goal every year to not be a part of the headlines. Every year I have that goal. And I've failed every year.”

23XI with Jordan and Trackhouse with Pitbull are two of three new teams entering the Cup Series this year in anticipation of a new car in 2022 that will make NASCAR more affordable for owners.

Kyle Larson returns after a nearly full-season suspension for using a racial slur and he will drive for Hendrick Motorsports, which in November celebrated its 13th NASCAR championship with Elliott's win. Larson and Elliott are two of the most dynamic young drivers in the series and hope to fill a void created by a rash of retirements, most recent seven-time champion Johnson.

New teams, new tracks, young drivers and an abundance of optimism has led broadcast partner Fox to market the 2021 NASCAR campaign as “the best season ever.” That remains to be seen starting with the Daytona 500 and ending with the Nov. 7 finale at Phoenix.

"I can’t remember, at least not as season that I’ve been a driver in Cup, this amount of changes ever happening before, and I think it’s a nice little shot in the arm,” NASCAR veteran Brad Keselowski said. "As far as best season ever, I don’t think I’m the right person to judge, but I don’t know how you could argue that it’s not mostly good stuff happening.”