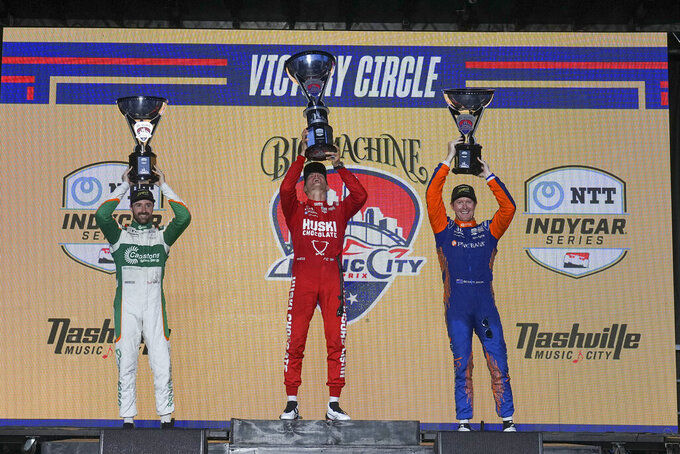 NASHVILLE, Tenn. (AP) — Marcus Ericsson thought for sure his car would snap in half as he treated the slowed car in front of him like some sort of Monster Jam ramp and soared through the air and leapfrogged a spot before he slammed onto the asphalt.

Airborne at the start, feeling sky high at the finish, Ericsson delivered IndyCar and Nashville a highlight that will be replayed in all sorts of promotional videos and social media posts pushing next year’s race.

With apologies to Detroit, Music City morphed into Motor City as IndyCar stormed into town and proved again downtown streets and bridges and zipping around NFL stadiums are where the series needs to race.

“I don’t know if they’re drunk, but they were pretty excited,” runner-up Scott Dixon said.

IndyCar drivers were treated as celebrities almost on par as the country music stars that call the city home wherever they went -- and they were seemingly everwhere. One fan jumped out of his car in traffic and flagged down Jimmie Johnson for a picture and an autograph. James Hinchcliff rode his electric scooter to the track every day and was called out by fans on the sidewalk.

OK, maybe Nashville doesn’t need an execuse to fill bars, but they were full for every podcast taping, autograph signing, or even just the chance to suck down a double-spiked juice cooler with a driver nearby.

“It wasn’t just like some guy that heard some noise and walked in,” Hinchcliff said. “These were race fans. There was a ton of merch, a lot of people that knew what they were talking about, knew the drivers. It wasn’t just we got dumb luck putting ourselves in a highly populous city. There’s an appetite for racing here. This town knew that we were here and looked like they loved that we were here.”

The race capped a summer renaissance for racing’s return to Nashville.

NASCAR kicked off the major race slate when Nashville Superspeedway officially reopened in June after a 10-year slumber and drew a sold-out crowd of roughly 40,000 fans to the event held about 35 miles outside city limits. The Cup Series had not raced in the Nashville area since 1984 when the last premier series event was held at Nashville Fairgrounds Speedway.

Tony Stewart brought his Superstar Racing Experience last month to a packed house of about 15,000 fans at the Fairgrounds.

Those series didn’t race through the city. The course stretched 2.17 miles, featured 11 turns -- including one that Colton Herta couldn’t solve -- and a 3,500-foot straightway that spanned the Korean War Veterans Memorial Bridge.

Temporary bridges connecting fans from one grandstand to the next in the sprawling complex were clogged and lines for the countless hot dog stands seemed as long as all 27 cars lined up on the grid.

“Everybody was cheering, cars were crashing, everything was going on,” Dixon said. “I think from the fans’ perspective, they had a ball. If there’s enough alcohol out there, it’s going to be a good show no matter what.”

Outside of construction problems, with one grandstand not completed until right before race day, the only hiccup was the nine cautions and two red flags that halted the race.

“Maybe next year I think there may be some areas of track that can change a little bit that would create some passing zones, maybe make the racing a little bit better,” Dixon said.

The 80 laps created enough spins and wrecks that it manufactured some real drama to see if Ericsson could beat not just Herta and Dixson, but a setting sun that had the race end near darkness.

Who knows? Runs next year's race on Broadway so the neon lights off the honky tonk bars can have them racing all night long.

With a checkered flag and and arms full of gifts given to him from race promoters, Ericsson kept the race in perspective: It wasn’t a classic race, but so what? Most times, it’s the show that matters, and Nashville knows how to put one on.

“The track going through downtown, it’s been so cool to race on,” he said. “I think for IndyCar as a series, I think I said to some people, to grow and get even more fans and new fans, it’s events like this that makes a difference because it’s such a cool event.”