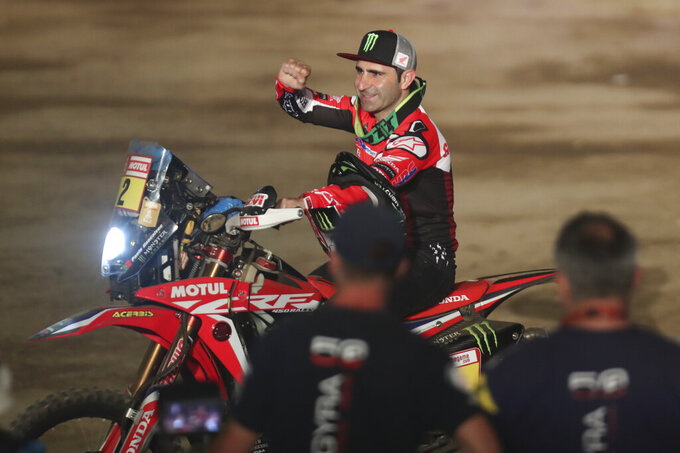 FILE - In this Sunday, Jan. 6, 2019 file photo, Paulo Gonçalves of Portugal rides his Honda motorbike during the podium ceremony before the start of the Dakar Rally in Lima, Peru. Gonçalves died in Saudi Arabia on Sunday Jan. 12, 2020 while taking part in his 13th Dakar rally (AP Photo/Martin Mejia, File)

WADI AL DAWASIR, Saudi Arabia (AP) — Portuguese motorbike rider Paulo Gonçalves has died on the Dakar Rally, becoming the first competitor killed since the event's move to Saudi Arabia this year. He was 40.

Rally organizers said Gonçalves fell from his Hero motorbike during the seventh stage Sunday and suffered a cardiac arrest. He was found unconscious by the staff of a medical helicopter and taken to hospital, where he was pronounced dead.

Gonçalves was competing in the Dakar for the 13th time and had a best finish of second in 2015.

“The entire Dakar caravan would like to extend its sincere condolences to his friends and family,” organizers said in a statement on the rally's website.

The last competitor to die on the Dakar Rally was Polish motorbike racer Michal Hernik in Argentina in 2015, though two non-competitors were killed in crashes with vehicles in 2016.

Carlos Sainz continues to lead the rally's car class by 10 seconds from Nasser Al-Attiyah after claiming his third stage win of this year's event.

In the motorbike class, U.S. rider Ricky Brabec continues to lead. The stage was won by Argentinian Kevin Benavides, who was deducted time he spent trying to help Gonçalves.