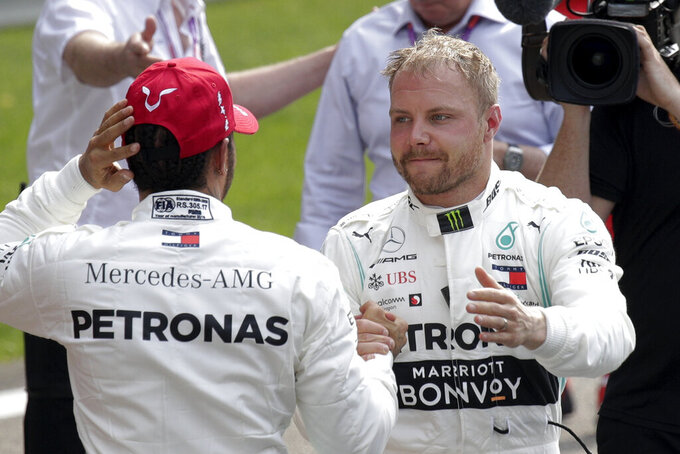 Bottas topped qualifying in 1 minute, 31.547 seconds with Hamilton second in 1:31.570. The teammates are the leaders after the first two Formula One races this season with each having won once.

Ferrari's Sebastian Vettel will start third with teammate Charles Leclerc alongside him on the second row. The two Red Bull drivers, Max Verstappen and Pierre Gasly, will make up the third row in what F1 is billing as its 1,000th Grand Prix, dating from 1950 at Silverstone in southern England.

"The weekend so far has been very good," Bottas said. "(Sunday is) still the big day."

Ferrari has had more flat-out speed than Mercedes in the early season, but China seems to have leveled the playing field.

"This is something we will obviously find out (Sunday)," Hamilton said. "But looking from Friday, it has been pretty close for the top three teams."

Hamilton, the defending champion who claimed his fifth title overall last season, won the Bahrain GP two weeks ago. He took the pole in the season-opening Australian GP last month but finished second to Bottas.

"There are many question marks but today was encouraging," said Hamilton, who has won the Chinese GP five times. "I was struggling with the car throughout the weekend."

Vettel, a four-time season champion himself, was philosophical about starting on the second row.

"It's obviously important, if we can't beat them, to be right behind them," he said.

Ferrari stumbled in Bahrain. Leclerc would have won comfortably but had an engine failure late in the race.

"I think it was really unlucky the way it happened," said Ferrari team principal Mattia Binotto. "We changed all our units here in China for precaution."

None of the fastest drivers seem particularly moved by F1's 1,000th-race celebrations.

"I mean, it's really not much of a moment," Hamilton said when asked about the significance. "It's just another race we're here to win. But it's great for the sport."

Alexander Albon walked away uninjured from a stunning crash in practice on Saturday. His team, Red Bull Toro Rosso, did not have enough time to fix the battered car for qualifying.

Albon hit the wall on the final turn in practice and sat for several seconds with only his still head visible in the cockpit. He broke the silence following the crash by making radio contact with the pits.

"Sorry guys," he said over the radio.

The British-born Thai driver lost control as the car started to slide. He tried to regain control, but the car spun around and the front left side plowed into a wall near the pit lane, scattering parts of the car across the track.