Mercedes and Red Bull at the top in F1 preseason testing 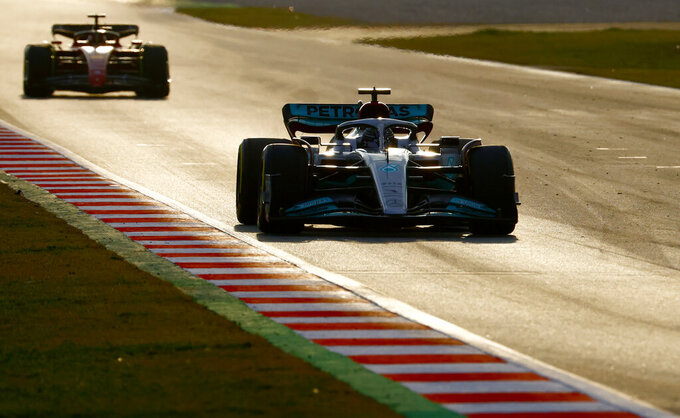 Mercedes driver Lewis Hamilton of Britain steers his car during a Formula One pre-season testing session at the Catalunya racetrack in Montmelo, just outside of Barcelona, Spain, Friday, Feb. 25, 2022. (AP Photo/Joan Monfort)

Formula One debuted its new generation of cars in preseason testing in Barcelona this week, and in the end it was still Mercedes and Red Bull dominating.

Lewis Hamilton set the fastest overall time with Mercedes at the Barcelona-Catalunya Circuit on Friday, ahead of teammate George Russell and the Red Bulls of Sergio Perez and Max Verstappen. The Mercedes duo set their times on softer — and faster — tires.

Hamilton said they were some “interesting few days” of testing.

“It’s not been the easiest or smoothest running, we have some obstacles to overcome," he said. “The car is a lot different to drive than in previous years, as are the tires, but we’re working our way through our program. The whole team has done an amazing job this week. ... We’ve got a lot of data to go through from these three days and we’ll just put one foot in front of the other and put in the work.”

Mercedes won seven straight driver titles before Hamilton lost the championship to Verstappen on the last lap of the last race in 2021.

“We’re not fully happy with the balance of the car, but we’re here to learn and we’ve made some good experiments,” Russell said. “We are happy with the direction we are heading in.”

McLaren and Ferrari were not near the top of the time sheets on Friday but had already shown their strength on the previous days. Lando Norris was fastest with McLaren on the first day and Charles Leclerc was quickest with Ferrari on the second day.

“I don’t think we’re in an amazing place, but I think we’re in a good place,” Norris said. “It’s been a good start, we’ve kept things very clean. It’s been productive and we have made progress.”

All of the top teams showed good reliability, although Red Bull struggled with a gearbox issue on the second day. Ferrari ran the most overall laps over the three days, followed by Mercedes, McLaren and Red Bull.

The teams that faced the most problems included Alfa Romeo and Haas, the American-owned outfit that ran Friday's sessions without the sponsorship of Russian company Uralkali amid increasing disquiet following Russia's attack on Ukraine.

Four-time champion Sebastian Vettel, the fifth fastest with Aston Martin on Friday, had already said he would not compete at the Russian Grand Prix in September, a race that was eventually scrapped from the calendar on Friday.

Haas, Aston Martin, Alpine and AlphaTauri were not able to run in Friday's afternoon session, which began on an artificially soaked track to test Pirelli’s wet tires.

There were no major incidents during the first two days but the final session was red-flagged five different times in the morning alone as Fernando Alonso, Pierre Gasly, Vettel, and Chinese rookie Zhou Guanyu faced problems.

Another three-day test period is scheduled for March 10-12 in Bahrain ahead of the season-opener there on March 20.