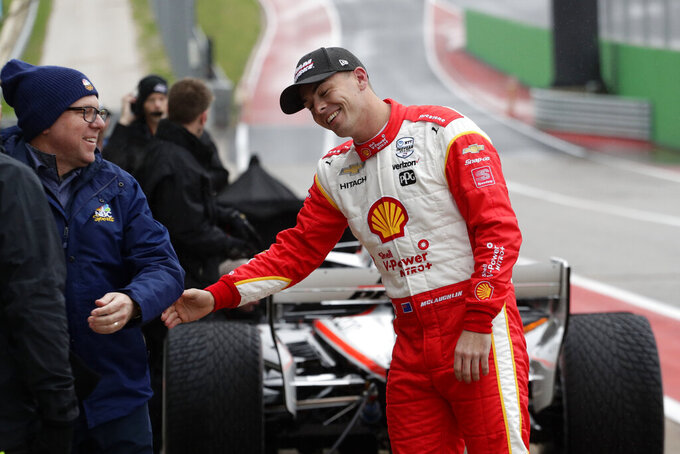 CHARLOTTE, N.C. (AP) — Scott McLaughlin completed the Bathurst 1000 in Australia, collected his third consecutive Supercars championship, then hopped on a plane headed to the United States to start his IndyCar adventure.

The grueling itinerary took McLaughlin first to Sydney to catch a connection to Los Angeles and then a final leg to Charlotte — all in time for him to log a four-hour stint in the Chevrolet simulator as soon as he landed.

McLaughlin's pandemic-postponed IndyCar debut at last comes Sunday in the season finale at St. Petersburg, Florida. He will be properly prepared.

McLaughlin has accomplished all he can racing touring cars in Australia, where he's won 56 races, including last year's Bathurst 1000, and all those titles. He drives for Roger Penske in Supercars and in 2019 the boss asked McLaughlin if he was interested in driving an Indy car.

The New Zealander is a longtime fan of countryman Scott Dixon and typically wakes up at 3 a.m. to watch IndyCar races. A tryout in a Penske car was a no-brainer, and plans were set for McLaughlin to run the road course at Indianapolis Motor Speedway in May.

He completed three test sessions before the coronavirus decimated the IndyCar and Supercars schedules. McLaughlin couldn't travel outside Australia and a debut race did not seem possible this year.

He got a reprieve when the St. Pete race, originally scheduled as the March 15 season opener before its cancelation, made it back onto the IndyCar calendar as Sunday's championship-deciding finale.

Team Penske has not yet announced a 2021 schedule for McLaughlin but the 27-year-old has made clear that IndyCar is where he wants to race.

McLaughlin's debut comes in the same event his Team Penske teammate Josef Newgarden will race five-time series champion Dixon for the title. Newgarden assisted McLaughlin during his previous test sessions and believes St. Pete, the only street course on the schedule this year, will be a “fascinating” challenge for the newcomer.

The schedule has been whittled down to just one true practice session on Saturday before qualifying and then Sunday's race. McLaughlin's test sessions were all on road courses.

“This is going to be an enormous task for Scott,” Newgarden said. "He doesn’t have a lot of time. This is a very abnormal St. Pete weekend. He’s got to work on the fly. He’s never been to this track. He’s never really driven the car on a true street circuit.

It will likely be the start of a second career for McLaughlin, who is expected to be announced as the driver of a new fourth car in the Penske stable. He was unable to defend his Bathurst victory last weekend, finishing fifth, which would be a small incentive to return to Supercars.

“I’ve done everything I wanted to achieve. I wanted to win at Bathurst and a championship. Thankfully I won three championships and one Bathurst,” he said. “If it did come to the point where I was moving on from Supercars, I would be satisfied.”