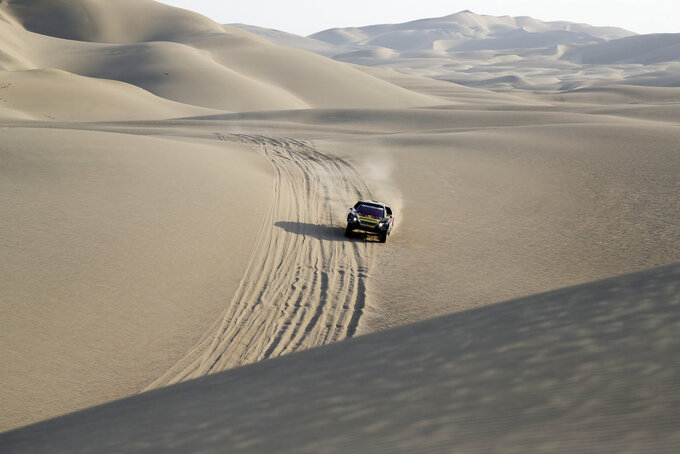 LIMA, Peru (AP) — Sebastien Loeb won the second stage of the Dakar Rally on Tuesday, showing he can master the Peruvian dunes where he crashed out last year.

Giniel de Villiers was fourth and became the overall leader, 28 seconds ahead of Toyota teammate Bernhard Ten Brinke. Nani Roma was third overall, and Loeb was less than two minutes off the pace.

Loeb hit the front before the halfway point of the 342-kilometer stage down the Pacific coast between Pisco and San Juan de Marcona, and held off a hard-charging Roma to win by eight seconds.

"Finally, we did a good stage with no big mistake," Loeb said. "For the moment, everything is OK."

The Frenchman's caution is based on experience. Last year, Loeb was in second overall when he had to abandon the race after accidentally driving into a hole to avoid another car and his co-driver was hurt.

Roma also withdrew last year when he rolled his car 200 meters from the end of an early stage. He spent the past year rallying more than usual to be free of any fears for this Dakar.

Ten Brinke, third on the stage, was another driver looking to rebound. Last year, he was on the brink of finishing third when he had to retire on the penultimate stage.

De Villiers played it safe to finish fourth and grab the overall lead, which will be ominous for his rivals. De Villiers rarely makes mistakes. The champion of the first Dakar in South America in 2009 has never retired in the previous 15 Dakars. He has finished in the top five in each of the last eight.

Overnight leader Nasser Al-Attiyah was more than three minutes back, and seven-time winner Stephane Peterhansel was 14 minutes down after getting stuck in dunes.

Joan Barreda remained the motorbikes leader after finishing third on the stage, won by defending champion Matthias Walkner. The Austrian moved to 91 seconds behind Barreda overall.