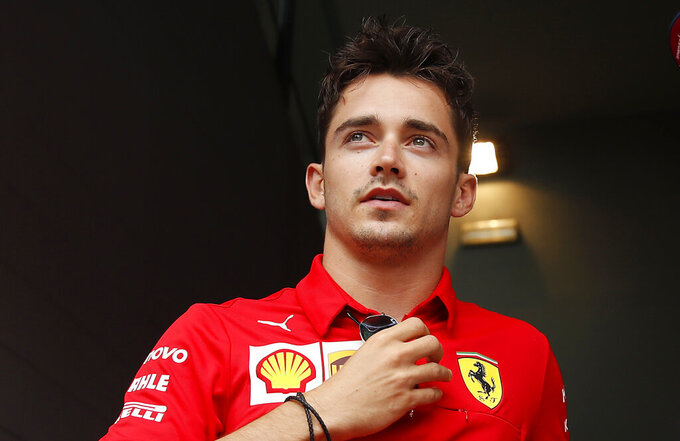 Ferrari driver Charles Leclerc, of Monaco, stands in the paddock, at the Monza racetrack, in Monza, Italy, Thursday, Sept. 5, 2019. The Formula one GP will be held on Sunday. (AP Photo/Antonio Calanni)

MONZA, Italy (AP) — Nine years is starting to feel like an eternity for Ferrari.

The storied Formula One team hasn't won its home race since 2010, but has good reason to think that drought could end at this weekend's Italian Grand Prix.

Those hopes don't even rest solely on four-time world champion Sebastian Vettel this time, but rather on the younger and more inexperienced Charles Leclerc.

The 21-year-old Leclerc clinched the first F1 victory at last weekend's Belgian Grand Prix, and will be looking to make it a double at Monza on Sunday.

"It's always difficult to do the first step but once you do it, it takes quite a bit of weight off your shoulders," he said on Thursday. "I'm very proud but not had much time to think about it. We're already here four days later in Italy and we need to focus fully on the job that we have to do here.

"But now it's done I can focus on the future and hopefully many more."

Championship leader Lewis Hamilton is well aware of what the momentum of a first victory can do.

Hamilton secured his first victory in the 2007 Canadian GP — at the age of 22 — and went on to win the next race, in the United States.

"It's usually easier with the flow, to ride that wave into the next one and knock out a double, two wins in a row, particularly when you have also got two tracks that are similar in terms of requirements of performance of a car.

"So this could be his second win this weekend, who knows? I'm going to do everything I can to stop that."

Monza — known as the Temple of Speed — is the fastest track on the circuit and, just as with Spa, the high-speed layout is likely to suit the Ferrari machinery.

"It's a similar track, very different but in terms of the way the cars are set up similar to last weekend. I hope we can be as competitive as we were there," Vettel said. "For sure we've seen the trend that in qualifying we have a bit of an edge on these types of tracks, whereas in the race everything moves very close together ... I can't give you any predictions but I guess it will be very tight. I hope we have something to say."

The passionate Ferrari 'tifosi' (fans) are hoping to finally cheer their team to victory at its home track, something they haven't been able to do since Fernando Alonso's win in 2010.

That wait looked set to end last year when Kimi Raikkonen clinched Ferrari's first pole in Italy since that Alonso victory, with Vettel completing a front row lockout. But instead, Hamilton ultimately recorded his fifth victory at Monza.

This year, Leclerc has replaced Raikkonen and is already forming a solid working relationship with Vettel.

"I think we found the right compromise with Seb between competition and also working together to try and improve the car and to work for the team," Leclerc said. "I think this is extremely important for teammates.

"Any time we are getting into the car I want to beat him as much as he wants to beat me, but whenever we are out of the car, we manage to share information, speak together and, yeah, just try to do our best to help the team to move forward and to bring the car where it should be. I think it's a very good relationship."

For Hamilton, it still looks like a matter of when rather than if he will win a sixth title.

Hamilton finished second in Belgium to extend his lead over Mercedes teammate Valtteri Bottas to 65 points. There are just 200 points left to race for.

"My approach stays the same. If it ain't broke don't fix it," Hamilton said. "Last year I took a little more risk in this race but I needed to, because I was in a different position points wise, but it wasn't a silly risk. I keep that balance now and if I was to change it it could have a good or a bad effect in the future, probably a negative."