The Latest: Newgarden gives Roger Penske yet another win 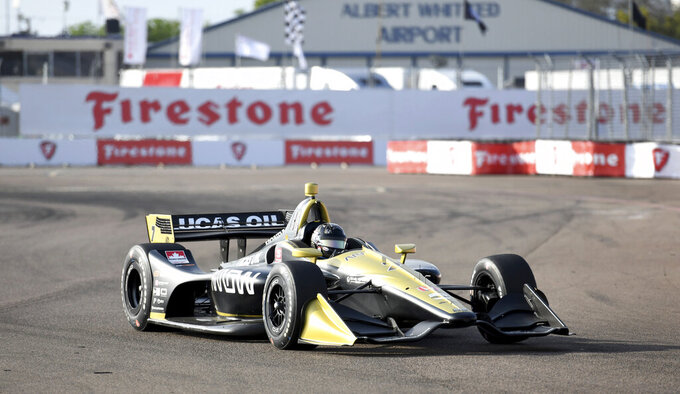 Team Penske drivers have combined to win two NASCAR races, two Supercars races in Australia and now the IndyCar opener for four victories in seven days. As Newgarden was taking the checkered flag in front of boss Roger Penske, teammate Ryan Blaney was leading the field to green for the NASCAR race in Phoenix.

The race showed that Penske and Chip Ganassi Racing opened the season at the top of the series as the organizations claimed the top four spots. Scott Dixon was second for Ganassi, followed by Will Power for Penske and then Ganassi rookie Felix Rosenqvist.

Sebastien Bourdais will not win his third consecutive IndyCar race on the streets of his home city.

The Frenchman had a mechanical failure that forced him to pull off course 11 laps into the race. Bourdais won the IndyCar season-opening race through the downtown streets of St. Petersburg the last two years.

Bourdais has called St. Pete home since he returned to Florida from Europe when his Formula One career ended after the 2009 season.

Pole sitter Will Power pitted from the lead when Bourdais went off course. That put rookie Felix Rosenqvist out front leading laps for the first time in his IndyCar career.

As Power worked his way back into the lead on lap 19, IndyCar called its first full course caution because Ryan Hunter-Reay stopped with an apparent engine failure.

Will Power will lead the field to green in IndyCar's season-opening race as Team Penske looks to extend its recent run of motorsports success.

Power and Josef Newgarden make an all-Penske front row for Sunday's race through the streets of downtown St. Petersburg. Penske driver Ryan Blaney starts from the pole later Sunday at the NASCAR race in Phoenix, where the organization is seeking its third consecutive NASCAR victory.

Power has started on pole eight times in the last 10 years of this race.

The starting grid represents the top three teams in IndyCar as Penske, Chip Ganassi Racing and Andretti Autosport all swept a row during qualifying. Felix Rosenqvist, a rookie from Sweden, and reigning IndyCar champion Scott Dixon start on the second row for Ganassi.

Colton Herta is making his debut for Harding Steinbrenner Racing and the 18-year-old has been fast all weekend. He would have qualified inside the top six, but his laps were thrown out as punishment for blocking.