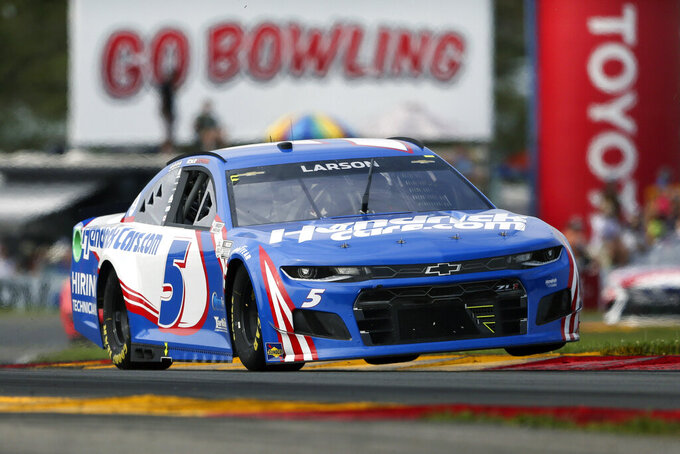 WATKINS GLEN, N.Y. (AP) — It took five wins by Kyle Larson to catch the most consistent driver in NASCAR's Cup Series this season, but he finally did it.

Now, it's a sprint to finish first in the driver points standings with three races left in the regular season. Larson and Denny Hamlin are tied with 917 points.

“I think for him and I both, we’ve been mentally there for a while now,” Larson said after his series-leading fifth win on Sunday at Watkins Glen. “And yes, I think come playoff time, we’ll just keep doing what we’ve been doing and, hopefully, we’ll find ourselves in the final four.”

Hamlin gained the points lead after the second race of the season at the Daytona road course and his consistency allowed him to extend it before Larson got hot in the spring and began pecking away.

After 23 races, both drivers have 16 top 10s and 12 top 5s, and Larson also has a series-best 12 stage wins to five for Hamlin. The 29-year-old Larson had a six-race stretch starting at Darlington in early May that included three wins and three runner-up finishes in the No. 5 Chevrolet for Hendrick Motorsports, which has won 11 races this season. He closed the gap to two points after the second race at Pocono in late June.

Hamlin then rallied to build his lead back to 13 points heading to Watkins Glen, and Larson’s victory there finally erased all of it.

Last year Hamlin won seven races in his No. 11 Toyota for Joe Gibbs Racing. This year, he's yet to taste victory.

“I feel like we’re good. We’re really good,” Hamlin said. “We just keep going back and forth each race on kind of who’s better. But he’s obviously got the wins and racking up the bonus points.”

The next stop on the schedule is Sunday on the road course at Indianapolis, then Michigan and the Daytona oval to end the regular season. Hamlin, a solid road racer, has a win at Watkins Glen and one second-place finish at Sonoma six years ago that was nearly a victory until Tony Stewart bumped him into the wall on the last turn of the race.

Larson also won at Sonoma in June, and in both of his road course wins he held off teammate Chase Elliott, who has seven road wins, third all-time.

“I’ve been good at road courses, but I just didn’t know,” Larson said. “I was always like a seventh- to a tenth-place guy when it came to the race. But now I think that I’m in a great race car (and) I’m able to run that aggressive pace the whole time, and my car stays with me.”

Indy will be a mystery for most. NASCAR switched from the famed 2.5-mile oval to a 14-turn, 2.439-mile layout that's flat as a pancake. The Xfinity Series first raced there last year, but this will be the Cup debut.

“I haven’t made a single lap there on a simulator or anything, and I’m not going to get the chance to do that this week," Larson said. "I honestly don’t even have the corners memorized yet. There’s nothing that I can take to there, but once I get laps and in practice maybe there’s some corners that will be similar, but we’ll just have to wait and see.”

Still, Larson is reveling in the moment.

“It’s fun racing him (Hamlin), and I look forward to the next few weeks and really even into the playoffs,” Larson said. “I’m glad there’s a fun little regular-season point battle. I feel like in years past it’s kind of been a blowout come the last race of the points. To be tied with three races left is pretty cool.”