Kyle vs. The King: Busch chases Petty for 200 NASCAR wins 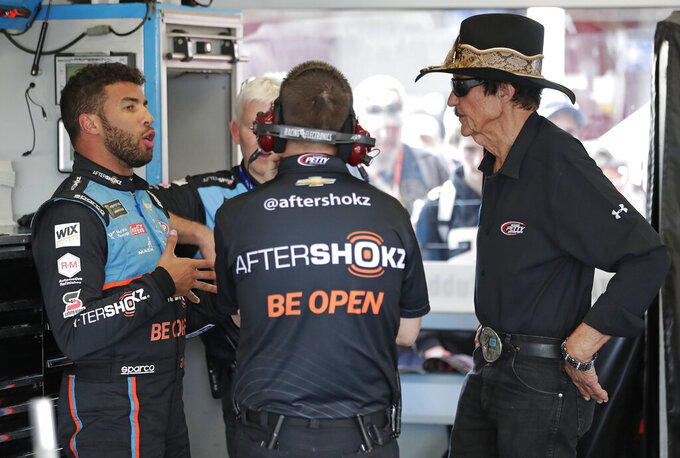 DAYTONA BEACH, Fla. (AP) — Kyle Busch had been sprayed with champagne and hoisted his winner's trophy last July at Pocono Raceway when fans sitting high above the stage shouted his name so they could snap a quick photo.

Busch craned his neck to oblige the requests and the signage on the premium seating structure was impossible to miss: the Richard Petty 200 Victory Circle.

NASCAR drivers for a generation have looked up at Petty's record win total, a number as synonymous with The King as his feathered cowboy hats, dark glasses and cowboy boots.

"It's just a bunch of wins," Petty said.

A whole bunch that add up to one big number that Busch is primed to zip past this season.

It's Kyle vs. The King in the battle for winningest driver in NASCAR history.

Petty is NASCAR's undisputed leaders in victories with 200 and each checkered flag was collected in the elite Cup series. He won his first race in 1960 and his last one in Daytona in 1984. Not only is Petty in first, he has no peer — David Pearson, who died in November, is up next with 103. Hall of Famer Jeff Gordon was the only other driver within striking of distance of 100 with 93 Cup wins.

The 33-year-old Busch has 194 NASCAR wins across three series and sits a solid 11th on the career Cup list with 51.

"If he's not the best, he's one of the best," long-time Petty crew chief Dale Inman said.

The debate is raised because Busch accumulated his wins in two other NASCAR series that weren't available in Petty's heyday: Busch has a record 51 wins in the Truck Series (formed in 1995) and 91 more in the second-tier Xfinity Series (1982).

Busch said he would never compare his win total with Petty's.

"Absolutely not because his number is obviously Cup wins and mine's not," Busch said.

Busch seems a lock to pass Petty for the overall mark at some point this season. He won eight times in Cup in 2018 and that total alone would push him past Petty. He is scheduled to race five times this season in Trucks and seven in Xfinity.

Even as Busch posted big Cup seasons, he continued to dip down to the lower levels and race each Friday and Saturday. Busch was the class of each series from 2008 to 2016. He'd sweep race weekends and take his customary bow to thousands of fans booing the outlier who had essentially spoiled a shot at a win for a rising star or lower-series stalwart.

When some teenager or some 20-something prospect would trudge into the media center with another runner-up behind Busch, the question would inevitably arise — is it fair for a veteran like Busch in top equipment to come down and run roughshod over the field?

Mike Trout doesn't moonlight in Triple-A. Joel Embiid doesn't mess around on off nights in the G-League. Tired of the complaining, NASCAR implemented rules for 2017 that restricted the number of Trucks and Xfinity races for Cup drivers. It was basically a Kyle Busch rule.

Petty earned his first victory in 1960, his third season on the Grand National circuit, and his 27 victories in 1967 still stand as a single-season record. While Busch has only competed in a 36-race season, Petty drove in 61 races — 61! — in 1964. He made 52 and 54 starts in consecutive seasons (1962-63) and crushed the competition in an era when NASCAR was still a regional series racing on short tracks in the South.

"If you go back and look at some of the older guys, Red Farmers and all that, they've won thousands of races in Saturday night deals. Sunday deals. Different kinds of cars. It's just a number," Petty said. "Just like me winning 200 is just a number. I just happened to be in the same kind of car."

Petty won his 200th race in his 915th career start but he failed to win again over the final eight years of his career. Busch, who is only racing this weekend in the Daytona 500, has 51 Cup wins in 498 starts.

"I could look at Richard Petty's wins and say, 'Well, they weren't quality wins because some of those were on dirt tracks, some of them came when they ran five, six nights a week, short tracks, half mile, quarter mile, little race tracks up in the north,'" he said. "If I looked at quality wins, most of Kyle Busch's wins are quality wins in the top three series. I could go in a lot of different directions."

Busch has set a goal of 100 Cup victories.

Petty towered over his peers and set records that endured for decades, and his mighty Cup victory total will likely forever stand as the peak of NASCAR's magic numbers.