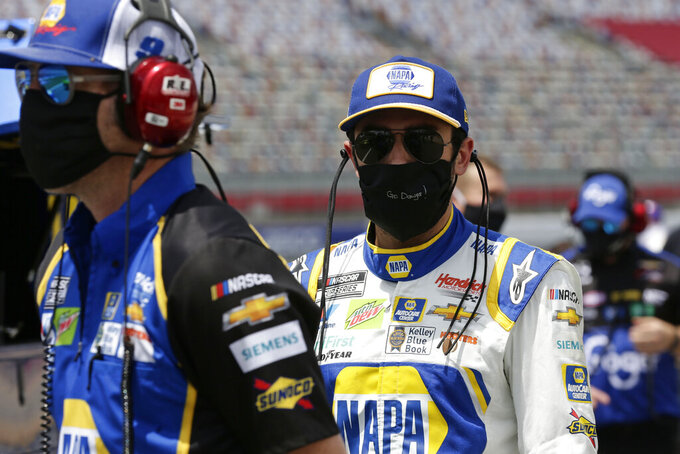 CONCORD, N.C. (AP) — Brad Keselowski has won the Southern 500, the Bristol night race, the Brickyard 400 and has now crossed the Coca-Cola 600 off his checklist of crown jewel victories.

Jimmie Johnson had a shot at snapping his three-year losing streak but instead it was extended to 102 consecutive races when Keselowski beat him in overtime early Monday at Charlotte Motor Speedway. Then his car failed inspection and his runner-up finish was thrown out by NASCAR.

All that action was over the final seven laps of the longest race in NASCAR history.

Elliott was cruising toward victory with two laps remaining in the 600 when a caution sent the race to overtime. The five additional laps — another 7.5 miles — pushed the longest event on the NASCAR calendar into a true Memorial Day finale.

A rewind of what happened at Charlotte Motor Speedway:

Elliott was trying to win at Darlington Raceway last Wednesday night when he was wrecked by Kyle Busch in what turned out to be the final lap of racing in a rain-shortened event. He showed his displeasure by flipping Busch the bird.

His Hendrick Motorsports team bounced back with a competitive Chevrolet in the 600 that Elliott drove to the front late in the race. Half a lap before he took the white flag that would have cemented his victory, teammate William Byron caused a caution that torpedoed the finish.

Elliott was the first car to head to pit road, where he got four tires. Keselowski was the first of eight cars to stay on track. Elliott couldn't get through traffic fast enough in the two-lap overtime finish and was the third car across the finish line. He was bumped to second after teammate Johnson was disqualified, but Elliott was just as bitter after the 600 as he was at Darlington.

“We were a lap and a half away from winning the Coca-Cola 600,” a brusque Elliott said after the race. “Just try again. That’s all you can do. I mean, there is really no other option. I can’t rewind time. There’s no other choice.”

KESELOWSKI SHOWS HIS WORTH

A Daytona 500 victory is the only crown jewel race Keselowski is missing on his resume. He won the first Cup title for Roger Penske, the first NASCAR races at Indianapolis Motor Speedway for Penske, and, as the team owner noted Monday, "kept my streak going" of Memorial Day weekend victories.

Will Power and Simon Pagenaud won back-to-back Indianapolis 500s the last two years and Keselowski's win at the 600 — the only event run on motorsports' most celebrated single day of racing — indeed gave Penske the coveted victory. The Pagenaud win in a contract year earned the driver an extension, but it remains to be seen what happens to Keselowski.

“We are in discussions,” Penske told The Associated Press on Monday. “COVID-19 has not allowed us to get together.”

Penske before the season swapped the crews for all three of his NASCAR drivers, and Ryan Blaney got an extension completed before the coronavirus pandemic stopped all business dealings. But the 10-week shutdown has apparently helped Keselowski increase his value.

Keselowski is the only former series champion in the free agent pool and the Coca-Cola 600 was the 31st win of his career — tied for 26th on the all-time list. And, Kyle Larson's desirability was hurt when he was fired by Chip Ganassi for using a racial slur.

He said early Monday morning he doesn't know where he stands right now.

“I know winning never hurts. I wish I had more news, but I don’t,” Keselowski said. "I hope to continue to compete at a very high level and be able to win races for a long time. We’ve got a race win at a major on a team that’s really just starting to click together. This team has a lot of potential.

“I hope that I get to take and make something of that for years to come. But it’s not all up to me. A lot of things have to come together, whether it’s sponsors or whatnot, management things. I hope it does because this is my 30th win at the Cup level with Team Penske. I think I got another 30 left in me. I’d like to have the chance at that.”

Johnson twice raced for the lead at Charlotte, including on the overtime restart when he lined up next to Keselowski. He came up short both times as the seven-time NASCAR champion failed to snap a winless streak that dates to Dover in June 2017.

Johnson is retiring from full-time competition at the end of the season and he wound up crossing the finish line second in what was likely his final Coca-Cola 600. He said his losing streak never entered his mind during the push for the win.

“Second is OK,” Johnson said. "I’m very proud of the effort we’re putting in. But second, stinks. It’s tough being this close to victory lane, but we’re knocking on the door and we’ll get there.”

The next blow came two hours after the race when NASCAR said his Chevrolet failed post-race inspection. Crew chief Cliff Daniels thought the car not meeting rear alignment measurements after the race could be attributed to a broken part; NASCAR said it has built-in tolerances “for parts that move. But if parts break, the number is the number.”

Although Johnson has just an eighth-place finish to show for the first three races since NASCAR resumed, the No. 48 team has shown promise. He was leading when he crashed in the first race back at Darlington Raceway and he technically finished second at Charlotte before the disqualification knocked him to last.

“I learned on my drive home last night we had been disqualified,” Johnson wrote on social media on Monday. “It's a tough reality to process but we are ready for Wednesday and whatever else 2020 throws at us.”