It's all work and no play for Schumacher's son in F2 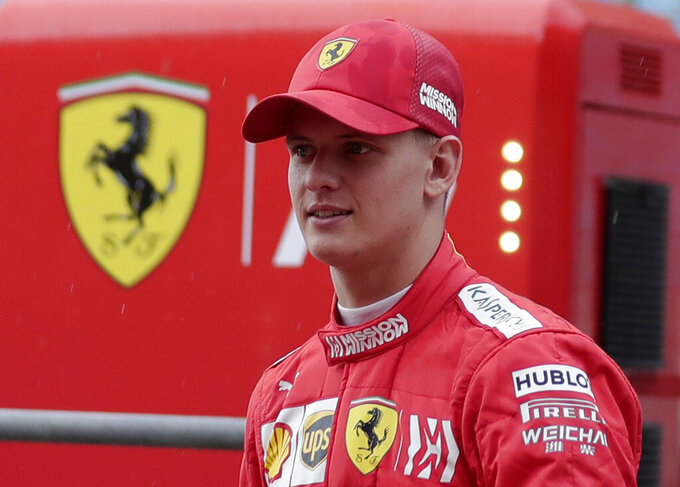 FILE - In this Tuesday, April 2, 2019 file photo, Mick Schumacher walks at the pit during his first F1 test for Ferrari at the Bahrain International Circuit in Sakhir, Bahrain. Mick Schumacher has a long way to go to follow in the footsteps of his father but no one can question he is trying his hardest to emulate the professional work ethic that helped Michael Schumacher become Formula One’s greatest driver. (AP Photo/Hassan Ammar, file)

MONTMELO, Spain (AP) — Although he still has a long way to go, Mick Schumacher is trying his hardest to emulate the professional work ethic that helped his father win a record seven Formula One titles and 91 races.

There is no time for on-line racing or just hanging out. Only training and more training as the 20-year-old German competes in his first season in Formula Two with other drivers fighting to convince an F1 team to give them a shot.

A typical day for the young Schumacher?

"Wake up. Breakfast. Training. Lunch. Training. Dinner," Schumacher said at the F2 paddock for the Spanish Grand Prix on Thursday.

What about seeing friends?

"If they train," Schumacher said, this time allowing himself a laugh at his own one-dimensional life.

Schumacher said he had no interest in playing video games as a way of supposedly honing his skills. For him, that would be a waste compared to following his team's practice regimen.

"If I do a simulator it is with a team, which is a proper preparation for me. That means data," Schumacher said. "I prefer going to the gym or whatever to be trained physically, which is for me also very good training for my mental side. I don't have the feeling I need to do on-line racing."

And any gaps between working out and driving are filled by studying notes and videos of past races to spot "opportunities for overtaking and strategies" for different tracks.

But all that personal sacrifice goes to earning the thrill of racing some of the fastest cars on the planet.

"It's passion at the end," Schumacher said, his eyes lit up. "Trying to find where's the limit for yourself, but also where's the limit of the car and trying sometimes just to exceed it. ... If you find that sweet spot and are able to repeat it every time, that's one of the best feelings because if you do a good lap you know it's good.

"And you get that feeling (you) get like addicted. You want more and more."

Schumacher is in ninth place in the F2 standings with 16 points for his Prema Racing team after races at Bahrain and Azerbaijan.

As part of Ferrari's driver academy, Schumacher is privileged to advice from former world champion Sebastian Vettel and young star Charles Leclerc. Schumacher also made the most of his chance to test drive a Ferrari F1 car in April, when he impressed by posting the session's second fastest time behind Max Verstappen of Red Bull.

But Schumacher said he has no more plans for F1 testing at the moment and is happy to focus on keeping modest, short-term goals in F2. He said that more scaled down cars with fewer sensors to feed back information in F2 were perfect to help improve a driver's natural "feel" for the car and the all-important condition of its tires.

Schumacher dates the start of his driving career to when he was 3 and his father had to tie a leash to his go-cart to make sure he didn't go too fast.

In 2013, he was skiing with his father when Michael hit his head on a rock. Michael Schumacher later emerged from a drug-induced coma, but updates have been scarce since he left the hospital in 2014 to be cared for privately at his Swiss home by Lake Geneva.

Now that has started down the same path toward F1, Mick Schumacher said he has a deeper understanding of his father's legacy.

"What he has done is extraordinary," Schumacher said. "I appreciate it more and more every day."