Hamilton would take flag for risky move to gain position 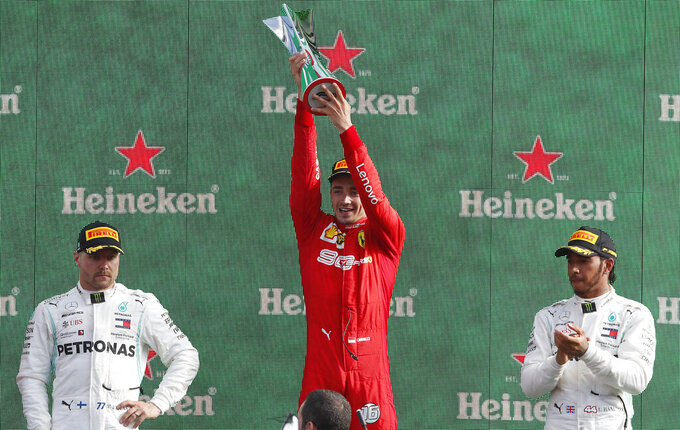 MONZA, Italy (AP) — Championship leader Lewis Hamilton said he would be willing to get a warning flag for a risky move if it meant potentially winning a race.

Hamilton was in relentless pursuit of Leclerc for most of the race and almost got past on Lap 23 but his younger rival veered to the right and forced him onto the run-off.

"He didn't leave me a car's width," Hamilton yelled on team radio. "He pushed me off."

The 21-year-old Leclerc was shown a black-and-white flag — the equivalent to a yellow card in soccer.

"If that's how we're able to race, then I'll race that," Hamilton said afterward. "As long as we know that you're allowed to not leave a car width for example, you don't have to do that now.

"You're allowed to run wide even if someone's there and you only get a warning flag, you only need that once to potentially keep the guy behind you. So as long as it's clear moving forwards that's fine, just so I know how to go into battle, same for all the drivers."

Max Verstappen was given a five-second penalty for a similar move last year at Monza. When Hamilton was questioned about it, he replied tersely: "I guess the stewards woke up on a different side of the bed this morning, I don't know."

Another defensive move from Leclerc later in the race had Hamilton saying on team radio: "Some dangerous driving going on here."

However, Hamilton said later that he had no qualms about Leclerc's style of driving.

"There is absolutely zero issue with us," the five-time world champion said. "I think he did an exceptional job day today and I don't have any problem. It is what it is.

"I haven't spoken to him but if we get some time together we might chat for a second, just reverse roles, just make sure he's cool if I'm in that position and that happens. If that's cool then that's how we're racing."

Hamilton saw his championship lead trimmed by two points but is still 63 points ahead of Bottas with seven races remaining.

The 34-year-old Hamilton said he would have driven differently in the first incident if he already had the title wrapped up.

"I wouldn't have moved and we would have collided," he said.