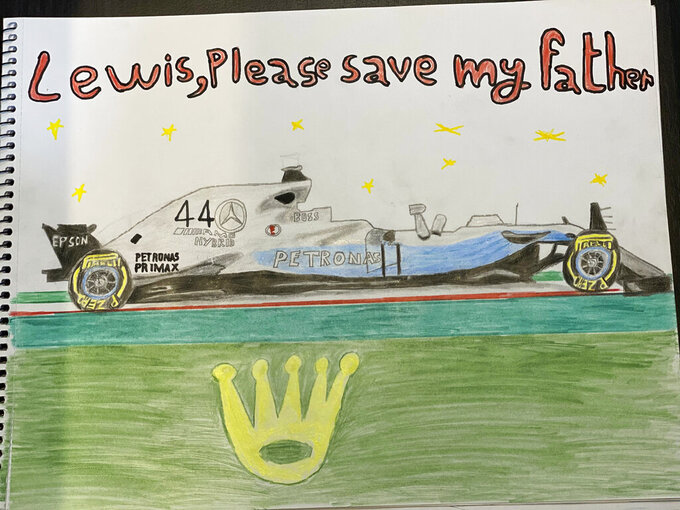 FILE - This photo provided by Sayed ahmed Alwadaei, Director of the Bahrain Institute for Rights and Democracy (BIRD), shows a drawing made in 2020 of Formula One champion Lewis Hamilton's racing car by 11-year-old Ahmed, with an appeal for help in saving his father from execution. Hamilton, the seven-time F1 champion, said Thursday, Nov. 18, 2021, that Formula One is “duty bound” to raise awareness of human rights issues as the series closes its season in the Middle East. (Ahmed/BIRD via AP, File)

Formula One is “duty bound” to raise awareness of human rights issues as the series closes its season in the Middle East, seven-time world champion Lewis Hamilton said Thursday.

F1 concludes its season with its inaugural races in Qatar and Saudi Arabia, followed by the season finale in Abu Dhabi, where the series has raced since 2009. F1 has raced in Bahrain since 2004 and now has four stops in the Middle East on its calendar.

Hamilton has spoken out on human rights issues before and played a role in the release of a political prisoner earlier this year.

“There are issues in these places that we’re going to, as there are around the world, but of course (the Middle East) seems to be deemed as the worst in this part of the world," Hamilton said ahead of Sunday's race, the first in a 10-year deal between F1 and Qatar.

“I do think as these sports go to these places, they're duty bound to raise awareness for these issues and (that) these places need scrutiny, need the media to speak.”

Qatar and Saudi Arabia have been accused of “sportswashing” their human rights records by using high-profile sporting events to project a favorable image of the countries. Qatar hosts the World Cup next year.

“Equal rights is a serious issue," Hamilton said. "They are trying to make steps. It can't change overnight. I heard there are things like a new reform with the ”kafala" system that was (still) in place a couple of years ago.

“There's a long way to go. I just feel that if we are coming to these places, we need to be raising the profile of the situation. I think we can still bring a spotlight to it and create that scrutiny and that pressure that could hopefully create change."

Governments in the region did not immediately respond to The Associated Press regarding Hamilton's comments.

Hamilton last year received personally addressed letters from three alleged Bahraini torture survivors as well as a hand-drawn photo of his Mercedes car from the young son of a Bahraini man on death row. The drawing was shown exclusively to AP.

Hamilton said at last year's race in Bahrain that human rights was “a massive problem” in some of the countries F1 visits and “as a sport we need to do more.”

Najah Yusuf, one of the three prisoners who wrote to Hamilton, in September was reunited with her 18-year-old son Kameel Juma after he was released from prison in Bahrain. He had been imprisoned and allegedly tortured since December 2019 in what Amnesty International deemed a “reprisal against his mother.”

His mother had spent over two years in prison for criticizing the Bahrain F1 race on social media.

The AP had asked Hamilton about Yusuf and other torture victims who wrote to him last season and AP’s reporting played a role in Yusuf’s son’s release, according to Sayed Ahmed AlWadaei from the Bahrain Institute for Rights and Democracy.

The institute noted that concerns about human rights remain a priority. In an email to the AP on Thursday, the institute raised the plight of Abdulajlil AlSingace, the former head of mechanical engineering at the University of Bahrain who has entered a 134th day of hunger strike in protest of “prison authorities' confiscation of his apolitical handwritten manuscript on Bahraini dialects.”

Hamilton and Mercedes teammate Valtteri Bottas on Thursday were the only two drivers out of the 20 on the F1 grid to directly address human rights issues in the region.

“I agree that there is plenty of work to do to raise awareness of situations around the world. I am definitely supporting that,” Bottas said. “I think we are trying to show as a sport that we are really equal and that it is possible.”

Attention has been given to human rights issues beyond F1, and on Thursday the Danish Football Association told BBC Sport that Denmark will put “extra pressure” on FIFA over human rights concerns ahead of the Qatar World Cup.

Denmark’s sponsors will withdraw their logos from training uniforms, BBC Sport reported, to make space for messages critical of Qatar. Commercial partners will also not travel to the World Cup.

Soccer fans from German giant Bayern Munich urged the club to cut ties with Qatar's national airline. Amnesty International also released a report in August accusing Qatari officials of doing little to i nvestigate thousands of young migrant workers’ deaths in the country over the past decade, which includes preparations for the World Cup.

Human rights activists denounced FIFA President Gianni Infantino’s appearance in a promotional video for the Saudi Arabian government in which he said the kingdom has made important changes. Premier League soccer club Newcastle has also faced heavy scrutiny recently for its Saudi ownership.

Hamilton acknowledged Thursday he’s not always been educated on the issues. A Briton and the only Black driver on the F1 grid, he has taken very public stances on issues of social justice, including racism and support for the LGBTQ community.

“I've been to a lot of these countries and been ignorant, been (unaware) of some of the problems," he said. "It's down to whether you decide to educate yourself and hold the sport more accountable. It takes time to go out and learn more about a region that’s foreign to us. We're not from these areas, it's incredibly complex on the ground in these places, with religion. So many complexities that it's difficult to even understand them all.

"One person can only make a certain amount of difference, but collectively we can have a bigger impact," Hamilton added. "Do I wish that more sportsmen and women spoke out on these issues? Yes.”