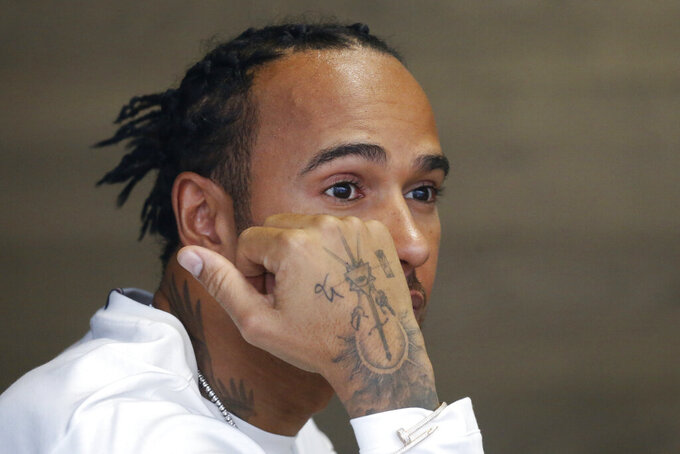 Mercedes driver Lewis Hamilton, of Britain, looks on from the paddock area during a press conference ahead of Sunday's Formula One Brazilian Grand Prix, at the Interlagos racetrack in Sao Paulo, Brazil, Thursday, Nov. 14, 2019. (AP Photo/Nelson Antoine)

SAO PAULO (AP) — Six-time Formula One champion Lewis Hamilton said Thursday he hopes to sort out his next contract soon, but he’s not in any rush.

The 34-year-old British driver’s deal with Mercedes is valid until the end of 2020.

“It's nice to be wanted. So hopefully soon we'll get that sorted,” the driver said about future contract negotiations.

"I have obviously considered the next couple of years and naturally I know that I want to continue racing,” Hamilton added. “But in terms of the 'future future' I have not planned absolutely everything.”

The British driver said he and Mercedes are “tied to the hip”, which doesn’t mean he has concrete decisions for his future on the grid.

“(But) there's no real stress, our word is our bond and has been all these years," Hamilton said about his relationship with Mercedes, his partner since age 13. “All that detail can take its time.”

The F1 champion also said he hopes to keep working with Mercedes’ team principal Toto Wolff, who reportedly is considering leaving the team.

“That is important for me, so I'm waiting also to see where he is, where his head is at," the driver said. “I don't particularly want him to leave if I'm staying in the sport. But ultimately that is going to be his choice.”

Wolff is not in Brazil for the race at Interlagos, a first miss for him since he and Hamilton joined the Mercedes in 2013.