Grosjean gets special test with Mercedes at French GP 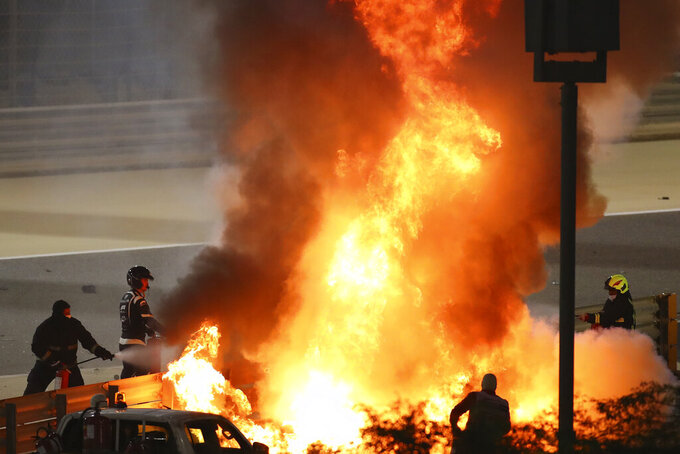 BRACKLEY, England (AP) — Romain Grosjean will make a brief return to Formula One with a special one-off test for Mercedes exactly seven months after he escaped a fiery crash in Bahrain.

It fulfills a promise Mercedes team principal Toto Wolff made following Grosjean's crash last November when the Frenchman drove for Haas. Grosjean pulled himself from the fiery wreckage and as he lay hospitalized, Wolff said in a news conference he did not want that to be Grosjean's final experience in F1.

“The first I heard about the chance to drive a Mercedes was in my hospital bed in Bahrain was when Toto was speaking to the media and made the invitation. Reading that news cheered me up a lot,” Grosjean said on Mercedes' website. “F1 didn’t get the chance to race in France during 2020 because of COVID so driving a Mercedes at the French Grand Prix in 2021 and then completing a test at the Circuit Paul Ricard, my home track, will be so special. I can’t wait for the day to arrive.”

Grosjean suffered serious burns to his hands that left visible scarring. He has since moved to IndyCar in the United States and has completed two races.

“We are very happy to support Romain with this special opportunity,” Wolff said. “Romain’s accident reminds us of the dangers these guys face each time they climb into the cockpit but it’s also a testament to the incredible steps this sport has taken to improve safety over the years. I know the F1 community will celebrate seeing Romain back on track.”