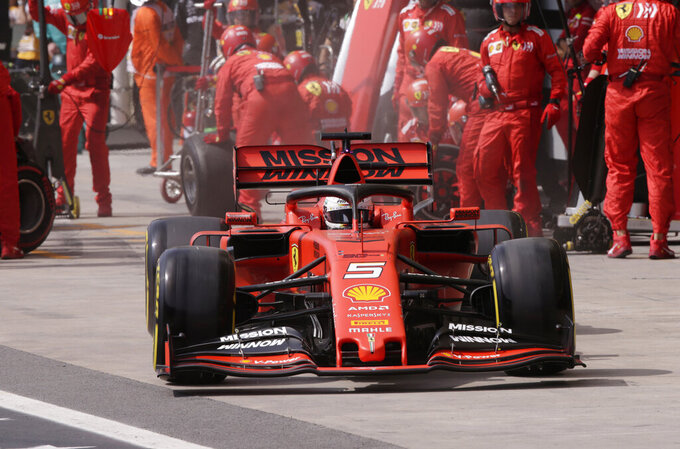 SAO PAULO (AP) — Ferrari hoped the Brazilian Grand Prix would bring some relief after poor performances and even accusations of cheating from opponents.

Instead, the Formula 1 team ended the weekend with a collision involving its two drivers as they fought for only fourth place at Interlagos.

Sebastian Vettel looked strong starting from second in Sunday’s race. Charles Leclerc, who began from 14th position because of an engine penalty, jumped to sixth in only 11 laps in Sao Paulo.

It was too good to last.

The two Ferrari drivers faced off on Lap 66 after a safety car restart, and contact between the cars gave Vettel a right-rear puncture, while Leclerc had a broken suspension. Both failed to finish.

“It is very disappointing for the team,” Vettel said after the race.

Leclerc said he wanted to see footage of the crash before reaching any conclusions. “It was a great race before that. But we can’t draw anything positive from this race,” he said.

Their exit allowed Red Bull’s Max Verstappen, the winner in Brazil, to jump to third place in the driver’s championship. He is 11 points ahead of fourth-place Leclerc with only the Abu Dhabi GP on Dec. 1 to go. Vettel is 30 points behind Verstappen and cannot claim a top three spot any longer.

Ferrari will also finish the season far behind Mercedes in the constructors championship.

After that race, Verstappen suggested that Ferrari had been “cheating”. The Red Bull driver said on Dutch TV that the Italian team’s performance dipped at Austin because of a FIA directive on fuel flow systems.

After the Brazilian GP Binotto said "both of them (Vettel and Leclerc) have got at least a small percentage of responsibility" for the clash.

"At the end, they were free to fight," Binotto said.