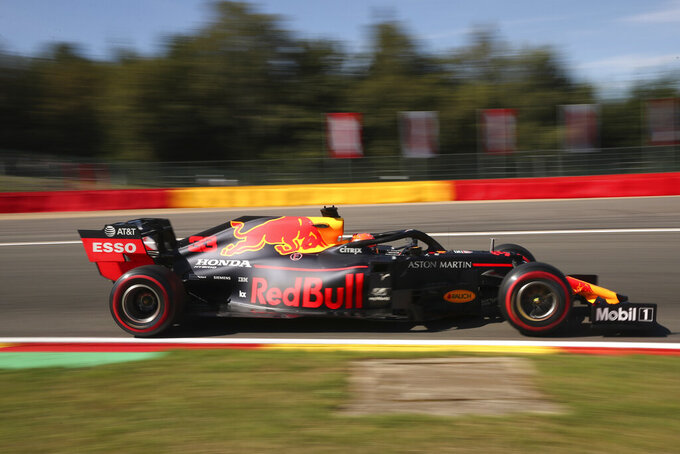 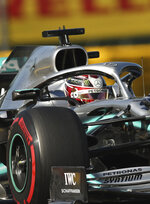 SPA-FRANCORCHAMPS, Belgium (AP) — Seeking its first win of an increasingly frustrating Formula One season, Ferrari got a welcome boost Friday with Sebastian Vettel and Charles Leclerc posting the fastest times in both practices for the Belgian Grand Prix.

After Vettel was fastest in the morning session, Leclerc topped the leaderboard under clear blue skies in the afternoon's second session.

In a further boost, Leclerc's time was nearly one second faster than the Mercedes cars of Valtteri Bottas and championship leader Lewis Hamilton, on a long and undulating 7-kilometer (4.3-mile) track which appears suited to Ferrari's advantage in straight-line speed.

Bottas and Hamilton were third and fourth, respectively, in second practice.

"They're nearly one second quicker than us down to Turn 5, which is fairly impressive," Hamilton said. "I had a feeling it would work really well for them this weekend. We have to apply the pressure in another way if we don't have it in pure pace."

However, Ferrari has at times impressed in practice and qualifying this season without managing to win any of the 12 races so far.

Vettel's last win was in Spa last year and the four-time F1 champion has failed to win any of the 20 races since then — a dismal run punctuated by some clumsy errors from the German driver who has led and lost the past two championships to five-time champion Hamilton.

The 21-year-old Leclerc has shown genuine promise and impressive speed in his first season with Ferrari — and only his second in F1 — but has failed to take advantage of two pole positions so far.

Still, it was a much better day for Ferrari than its two main rivals.

Hamilton had a visibility issue with his helmet visor in second practice, while Red Bull driver Max Verstappen — sixth in that session — was concerned over a loss of power and then later complained about a braking issue.

It was an awkward first session for Mercedes, too, particularly for Hamilton.

Bottas was about 1.3 seconds behind Vettel's leading time and Hamilton trailed by 1.4.

"Ferrari has been really strong today and they're killing us on the straight lines," Bottas said. "We need to make big steps if we're going to battle with them."

Hamilton spent the first half of first practice stuck in the garage with a malfunctioning throttle pedal, which had to be changed. He was sixth behind fifth-place Bottas with Red Bull driver Alexander Albon in fourth.

"Not a great start for us," Hamilton said. "We went back out and had another problem, so it was a little bit of a mess."

Vettel will doubtless hope the time gaps will be the same on Sunday, for he desperately needs to close the gap in the title race.

Hamilton leads by 62 points from second-place Bottas — 250 to 188 — with Verstappen 69 behind Hamilton in third and Vettel 94 points adrift in fourth.

Meanwhile, Albon looked assured on his Red Bull debut after being promoted from feeder team Toro Rosso during the midseason summer break. It has been some turnaround for 23-year-old Albon, who around this time last year thought his chance in F1 had gone.

"It's a big opportunity for me and I really know that," he said. "I've had a few ups and downs and just to be in this position is incredible."

The first session was briefly delayed after part of the engine cover on Lance Stroll's Racing Point car broke, sending debris onto the track.