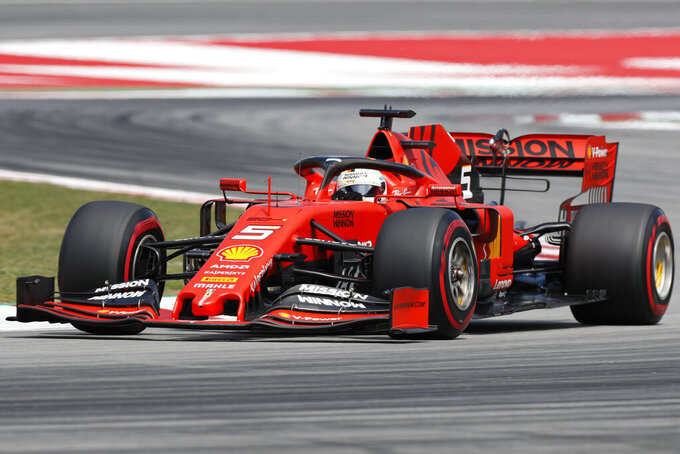 Ferrari driver Sebastian Vettel of Germany steers his car out of a curve during a qualifying session at the Barcelona Catalunya racetrack in Montmelo, just outside Barcelona, Spain, Saturday, May 11, 2019. The Spanish F1 Grand Prix race will be held on Sunday. (AP Photo/Joan Monfort)

MONTMELO, Spain (AP) — Ferrari had hoped that a new engine would help the team finally get ahead of Mercedes.

Instead, Valtteri Bottas and Lewis Hamilton put themselves in an excellent position to extend their record start to the Formula One season after Mercedes took the top two spots in qualifying for the Spanish Grand Prix on Saturday.

Ferrari driver Sebastian Vettel will start Sunday's race from third on the grid for the fourth time this season. But the gap seems to have grown— not diminished— in the performance level between the Italian cars and their rivals during the two-week break since Bottas and Hamilton combined for Mercedes' fourth one-two finish in Azerbaijan.

And this was after Ferrari had fast-tracked a new power unit for the first European race of the calendar to try to stop Mercedes from getting any further ahead. Vettel already trails Bottas by 35 points and Hamilton by 34 after four races and call ill afford another race without a victory.

Seeing his best lap still 0.8 seconds slower than pole-winner Bottas, Vettel said that some "daring" was called for if Ferrari wanted to turn it around.

"We are certainly not satisfied, but I am very happy with the approach, with the chance that we took in terms of trying something daring, something that ultimately will pay off," Vettel said.

"It will help us in terms of pace for tomorrow, and hopefully it sets us off in the right direction for the next couple of weeks."

Vettel said that while his and Charles Leclerc's Ferraris seem fast enough to match the Mercedes in flat-out speed on the straightaway, they are losing ground in the final stretch of the Barcelona-Catalunya Circuit that features several turns.

"(That) seems to be more than an Achilles' heel at the moment," Vettel said.

Leclerc, the only non-Mercedes driver to claim a pole position this season, had a tougher time in qualifying after he clipped a curb and did some slight damage to his car.

"I don't understand how I managed to lose that much of the car," Leclerc said. "We broke quite a lot and in (the third qualifying session) the balance was strange so we need to check the car again."

The 21-year-old Leclerc will start the race fifth behind Red Bull's Max Verstappen.