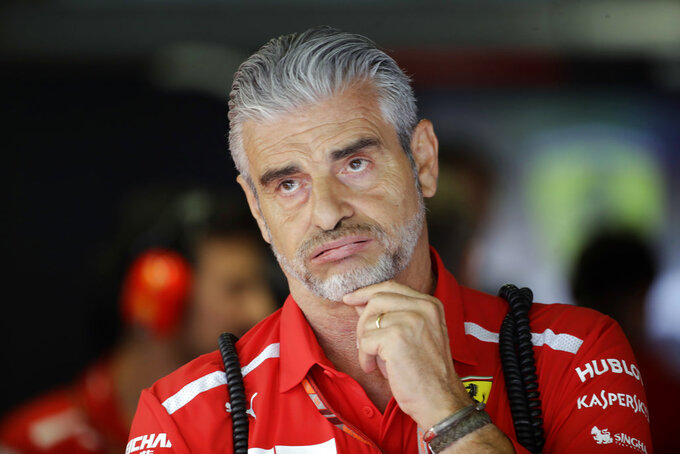 FILE - In this Sept. 1, 2018 file photo, Ferrari's team Chief Maurizio Arrivabene waits for the start of the third free practice at the Monza racetrack, in Monza, Italy. Ferrari has replaced Maurizio Arrivabene with Mattia Binotto as team principal following another failed Formula One title chase. Binotto had been working as Ferrari's chief technical officer, having been with the team for nearly 25 years. Ferrari says in a statement, “After four years of untiring commitment and dedication, Maurizio Arrivabene is leaving the team. The decision was taken together with the company’s top management after lengthy discussions related to Maurizio’s long term personal interests as well as those of the team itself.” (AP Photo/Luca Bruno, File)

Binotto, who had been working as Ferrari's chief technical officer, has been with the team for nearly 25 years.

"After four years of untiring commitment and dedication, Maurizio Arrivabene is leaving the team," Ferrari said in a statement. "The decision was taken together with the company's top management after lengthy discussions related to Maurizio's long term personal interests as well as those of the team itself.

"With immediate effect, Mattia Binotto will take over as Scuderia Ferrari's Team Principal. All technical areas will continue to report directly to Mattia."

While Ferrari driver Sebastian Vettel won the opening two races of the 2018 season and took pole position in three of the first four races, Ferrari's performance waned as the year went on, enabling Mercedes to win a fifth straight drivers' title with Lewis Hamilton.

Arrivabene had been in charge since the 2015 season, having previously worked for Philip Morris, a key Ferrari sponsor.

Arrivabene's criticism of Ferrari's technical department may have resulted in his ouster.

Having joined Ferrari in 1995 as a test engine engineer, Binotto was involved in the team's golden years when Michael Schumacher won five titles. He was promoted to technical chief in July 2016.

Binotto had reportedly been chosen previously as Arrivabene's successor by former Ferrari CEO Sergio Marchionne, who died in July.

Binotto was widely credited with creating cars that were competitive with Mercedes over the past two years — which put a spotlight on questionable strategic choices.

Arrivabene was criticized for the way Ferrari handled its home Italian Grand Prix in September, when a lack of team orders prevented Kimi Raikkonen from clearing the way for Vettel at the start — which was followed by contact between Vettel and Hamilton.

There was another tactical error concerning the choice of tires during qualifying for the Japanese GP. Hamilton clinched the title two races later in Mexico — with two GPs to spare — and finished with an 88-point advantage over Vettel.

In four seasons under Arrivabene, Ferrari won 14 races — 13 by Vettel and one by Raikkonen — and finished second three times in the constuctors' standings.

The 2019 season opens with the Australian GP in Melbourne on March 17.

Former Sauber driver Charles Leclerc has been hired to replace Raikkonen for this season, with Raikkonen having gone to Sauber.

Raikkonen was the last Ferrari driver to win a championship in 2007.