Ferrari misses out on a podium place at F1 Australian GP 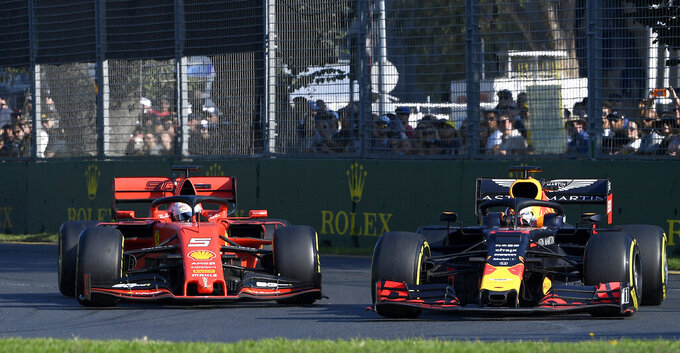 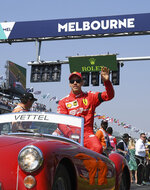 MELBOURNE, Australia (AP) — The Ferraris were touted as the fastest cars on the F1 circuit when Sebastian Vettel arrived with the intention of winning his third consecutive Australian Grand Prix title.

That would have equaled the great Michael Schumacher's mark in Melbourne. They'll leave without a podium place and, worryingly for the Scuderia faithful, after conceding a 57-second margin to Valtteri Bottas, who led Lewis Hamilton in a 1-2 finish for Mercedes on Sunday.

More concerning for Ferrari was the 35-second gap to Red Bull driver Max Verstappen, who overtook Vettel on the outside and finished in third place. Four-time world champion Vettel, who beat Lewis Hamilton here in the previous two years but finished second to the Mercedes driver in the season championships in 2017 and '18, finished a distant fourth. Charles Leclerc was fifth in his first GP for Ferrari, his best result ever in F1, but the 21-year-old from Monaco had a few driver issues.

"I guess we were just slow," Vettel said. "I was struggling with the tires, but even ignoring the lap l pitted, it looks like everyone else was having way less problems than l was."

At one point in the race, Vettel even asked the team crew over the radio why the cars weren't quicker.

Vettel was fastest enough in qualifying to start in third spot on the grid, but didn't have the pace to get close to the Mercedes or Verstappen's Red Bull. His fastest lap of 1 minute, 27.954 seconds — on the 16th — was well behind Bottas' bonus-point winning 1:25.580 and was slower even than Lance Stroll, Danill Kvyat and Pierre Gasly, who placed ninth, 10th and 11th.

Team principal Mattia Binotto had forecast issues when he said on the eve of the race that winter testing was nothing like the racing environment, and Mercedes remained the team to beat.

It turned out he was right, at least for Melbourne. What the first GP has shown, definitely, is that 2019 is unlikely to be a tussle just between Mercedes and Ferrari.