Ferrari heads to Monza with new look but same problems 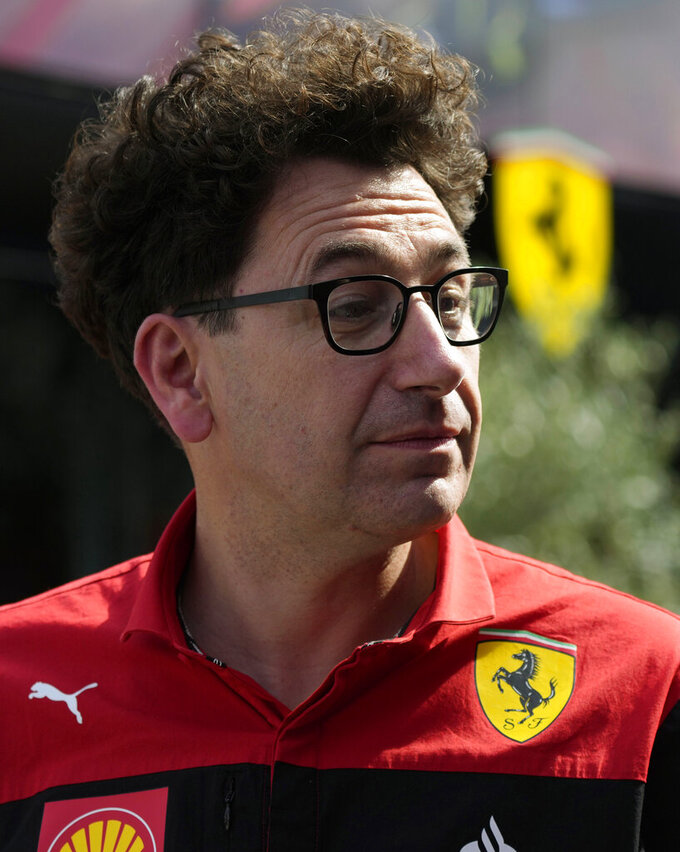 Team chief Mattia Binotto of Ferrari grimaces at the Monza racetrack, in Monza, Italy, Thursday, Sept. 8, 2022. The Formula one race will be held on Sunday. (AP Photo/Luca Bruno)

MONZA, Italy (AP) — It might be a new look for Ferrari at the Italian Grand Prix but some things remain very much the same as the famous Scuderia heads into its home race plagued by problems.

A strange season full of botched strategy decisions and bizarre incidents continued last week at the Dutch Grand Prix as Carlos Sainz Jr. had to endure a lengthy stop and later picked up an unsafe release penalty.

Ferrari teammate Charles Leclerc has fallen 109 points behind defending champion Max Verstappen with seven races remaining. He led the championship as recently as May.

“Mattia Binotto keeps saying, 'no, no, we don’t need to make any changes and everything is going well’, but when is that day going to come?” 2016 world champion Nico Rosberg said on Sky Sports recently, referring to the Ferrari team principal.

“Even Formula Two or Formula Three teams do a better job with their strategy and pit stops than Ferrari do.”

The pressure is again on Ferrari heading to its home track and there was speculation that further blunders in front of the passionate red-clad tifosi could signal the end for Binotto.

“There are always rumors around a Formula One team and especially with Ferrari,” Leclerc said Thursday. “But I think what is most important in those moments is not to get distracted with whatever is being said around. We are very united as a team and I think we need to keep on going like this.

“I didn’t hear that one in particular, but obviously we just have to focus on our own job.”

The fans will pack out Monza but in contrast to the sea of red, the Ferrari drivers will wear yellow racing suits and there will be a special one-off livery, with touches of yellow on the car, to mark the 100th anniversary of the circuit and the 75th one of the team.

“I like it. I like it. It’s very strange no, to see me wear yellow this this morning, with the Ferrari logo, but it’s cool,” Leclerc said. “I think for one race it’s really good.”

Ferrari has only won one of the past 11 editions of the Italian Grand Prix, with Leclerc emerging victorious at Monza in 2019.

Fernando Alonso, who currently drives for Alpine, was the previous winner for the Italian team back in 2010.

“At least in my case, I never paid too much attention to rumors,” said Alonso, who finished on the podium at Monza in all but one of his five seasons with Ferrari. “When you are in Ferrari or when you’re in Formula One in general you have to perform, if not things will change. It’s the same for drivers, mechanics, designers, bosses.

“There’s a huge pressure. This is not a charity event, this is professional sport.”