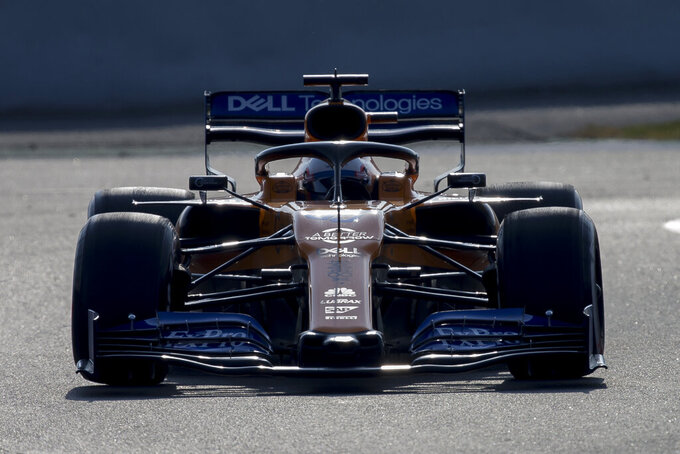 MONTMELO, Spain (AP) — Ferrari can start the Formula One season with the belief it has a car fast enough to give Mercedes a title challenge.

If, that is, the Italian team can keep it on the track.

Sebastian Vettel concluded the F1 preseason on Friday with the fastest time through the eight days of testing. Vettel's lap of 1 minute, 16.221 seconds around the Barcelona-Catalunya Circuit beat teammate Charles Leclerc's pace-setting time from the previous day.

But Ferrari was left with doubts after an electrical issue brought Vettel's car to a stop on the side of the track, forcing it to be hauled back to the garage. That ended their last chance to test the new car with two and half hours of running left.

The setback came two days after Vettel veered off course and crashed into the protective barriers for causes still being investigated by the team. On Thursday, Leclerc was also left stranded when his car stopped and started smoking.

"I'm not pleased for where we are at the moment. I think I would like to be faster. We'd like to be more reliable," Ferrari team principal Mattia Binotto said. "So I think there is still much to do and the season has not started yet."

Also worrying for Ferrari, defending champion Lewis Hamilton finally showed some speed in his Mercedes by clocking the second-best time at just 0.003 seconds behind Vettel.

Hamilton's teammate Valtteri Bottas was next, followed by Renault's Nico Hulkenberg and Daniil Kvyat in his Toro Rosso.

Hamilton said before setting his time late on Friday that Ferrari was looking like the stronger team heading into the season-opening Australian Grand Prix in two weeks.

"This is going to be the toughest battle," Hamilton said. "Ferrari's pace is very, very good at the moment. So the challenge is going to be harder than ever."

Binotto was having none of that talk, though.

"I'm happy to know that Hamilton believes that we are faster," Binotto said. "But I believe that Mercedes will be very, very strong in Australia. I think it will be completely wrong to think that we are faster. The fact that our car is running properly is a good starting point, but we are still not ready for Melbourne and I'd say it's a case of a work in progress."

Red Bull, which hopes to also give Mercedes a fight, appears to have even bigger concerns.

Max Verstappen was limited to a session-low 29 laps because of trouble with his gearbox. That came a day after Pierre Gasly lost control and went off the track for a second time during the preseason.

Kimi Raikkonen's Alfa Romeo and Kevin Magnussen's Haas also brought out red flags when they stopped on the track.

Williams, which finished in last place in 2018, concluded testing with Robert Kubica at the bottom of the time sheet more than a second slower than the nearest car.