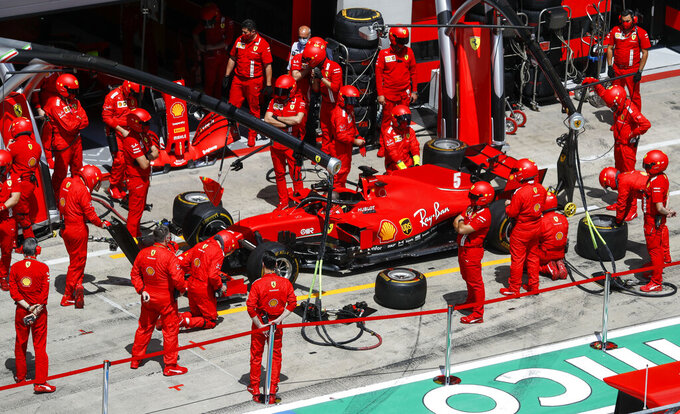 Mechanics prepare the car of Ferrari driver Sebastian Vettel prior of the Germany the Styrian Formula One Grand Prix race at the Red Bull Ring racetrack in Spielberg, Austria, Sunday, July 12, 2020. (Leonhard Foeger/Pool via AP)

SPIELBERG, Austria (AP) — It's already the pits for Ferrari, just two races into the new Formula One season.

Four-time F1 champion Sebastian Vettel and rising star Charles Leclerc are off the pace, and crashed with each other on the track Sunday for the second time in the space of four races.

The incident at the Styrian Grand Prix in Austria came on the first lap. Both drivers were so far back on the grid — Vettel starting 10th and Leclerc 14th — that they tangled in heavy traffic when normally they should have been near the front.

“I was fighting two other cars, we were already three cars into Turn 3," Vettel said.

Leclerc tried to overtake him down the right entering a hairpin bend but instead ended up riding over the back of Vettel’s car, mangling his rear wing.

Vettel, who finished 10th last week at the season-opening Austrian GP on the same Red Bull Ring track, had to retire while Leclerc came into the pits on the fifth lap and was soon out of the race.

At last season’s penultimate GP in Brazil, they had bashed into each other. Vettel appeared at fault that time after being overtaken cleanly by Leclerc, and recklessly trying to regain position.

“I apologized (to Vettel). Obviously excuses are not enough in times like this. I am just disappointed in myself," the 22-year-old Leclerc said. “I’ve done a very bad job today. I let the team down.”

Leclerc won two races and led all F1 drivers last season for pole positions — even beating world champion Lewis Hamilton 7-5 — but he was quick to recognize he missed the bigger picture this time.

“I put all thoughts of the team in the bin," Leclerc said. “I can only be sorry, even though I know it’s not enough. I hope I will learn from this and we will come back stronger for the next races."

Vettel is not getting a new contract for next year and is being replaced by McLaren's Carlos Sainz. Jr.

Ferrari has not won the drivers' title since Kimi Raikkonen in 2007 and the constructors' title the previous year.

Pressure is growing on team principal Mattia Binotto. He sounded despondent on Saturday, where Leclerc failed to even make it into the third and final part of qualifying.

An embarrassing situation for the proud Italian manufacturer.

“We have to accept that the stopwatch doesn’t ever lie. In two qualifying sessions, albeit in different conditions, we have not been competitive," Binotto said. “Not only against those who have been our closest rivals over the past few years, but also against others, who (previously) were generally behind us.”

Leclerc was just a fraction ahead of George Russell's Williams car — damning for Ferrari considering Williams was rock-bottom in the constructors' championship last year with just one 10th-place finish.

Ferrari even accelerated upgrades on the car, moving them forward to this weekend instead of waiting for next week's Hungarian GP as planned. But a new front wing did little to improve the SF1000's pace.

“We worked very hard to bring updates to the car earlier than planned, but they didn’t show their worth on track,” Binotto added. “We have to work out why and change this state of affairs, which is just not good enough for a team by the name of Ferrari. We cannot ignore the facts.”

Vettel was left pondering what difference the upgrades would have made.

“That is a shame. It was a bonus to come back to the same track and also today (was) very similar in terms of conditions," the German driver said. "But we will not get that answer I’m afraid."

He may find out next Sunday at the Hungarian GP, providing Ferrari can stay on track.