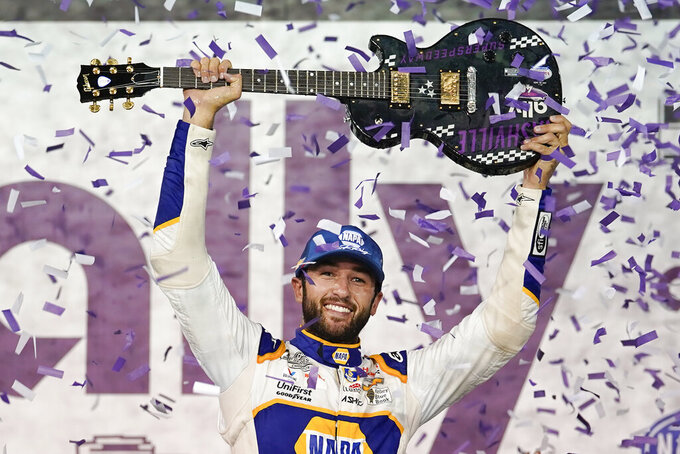 ELKHART LAKE, Wis. (AP) — Chase Elliott won the pole at Road America and will lead the field to green Sunday in his title defense on the Wisconsin road course.

NASCAR’s most popular driver is coming off a win last weekend at Nashville and put himself in position to make it two straight Cup victories with a strong qualifying run on the 4.048-mile road course. The Hendrick Motorsports driver edged Chase Briscoe by 0.038 seconds in Saturday qualifying.

That marks a major change from his starting position last year, when NASCAR’s premier series came to Road America for the first time since a Grand National event in 1956. Elliott started 34th last year but still found a way to win.

Seven of Elliott's 15 career victories have come on road courses.

Elliott, who enters Sunday’s event with a 30-point lead over Ross Chastain in the points standings, downplayed the advantage he will have by starting at the pole instead of the back of the pack as he did last year.

“These races are very long,” Elliott said. “Typically the cars that are superior find their way to the front, regardless of where they start. It’s nice to get a pole. You want them as much as you can, but I would much rather be good on Sunday than Saturday.”

Briscoe believed he had the fastest car and blamed himself for his inability to win the pole. Briscoe was the only Ford driver among the top four qualifiers.

“I should have run six-tenths faster than what I ran both rounds and just completely blew it,” Briscoe said. “I definitely have a really good short-run car. I don’t know what it’s going to be like on the long run, but on the short run it definitely is really good. I’ve just got to put it all together as a race-car driver. If we do that, then we should be in the hunt tomorrow.”