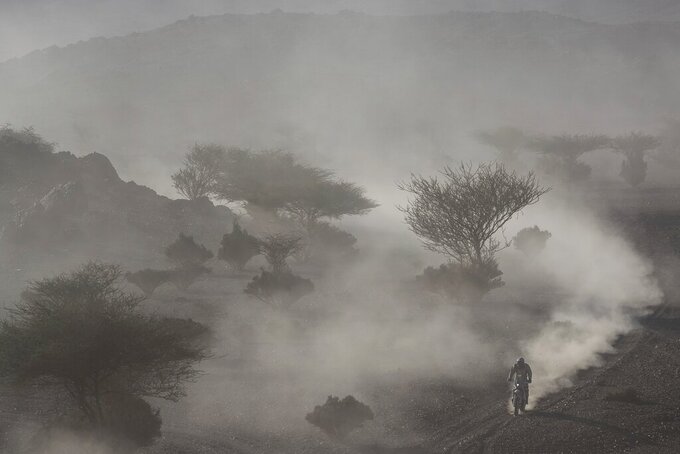 Terranova retired from the rally on the same stage a year ago in his Argentine homeland after hurting his back in a jump over a sand dune, but his caution paid off in the stony canyons on the 367-kilometer route up the Red Sea coast from Al Wajh to Neom.

De Villiers benefited from a navigation error in the last kilometers by local driver Yazeed Al Rajhi, who led the entire stage to that point then lost 13 minutes.

Of the other main contenders who also lost time, Carlos Sainz was almost five minutes back in second overall after turning around twice; Nasser Al-Attiyah suffered three flat tires to match his three flat tires on Sunday and was six minutes back; and Stephane Peterhansel got lost then his steering wheel disconnected from the axle five kilometers from the finish which cost him 13 minutes.

Two-time Formula One champion Fernando Alonso, competing in his first Dakar, hit a rock and lost a wheel 160 kilometers in. Forced to wait for assistance, he lost 2 1/2 hours but was undeterred.

“The navigation was perfect today, but the visibility is a nightmare behind the cars,” Alonso said. "We did about one hundred kilometres blind, not seeing much and eventually we hit something with the front wheel.

“I'm happy to ... continue the rally. That's the main target, to finish my first Dakar, with no more issues. It's only 700 kilometres, I think, that we have covered in the first two stages out of five thousand, so there is still a long way to go and I'm ready to enjoy them.”