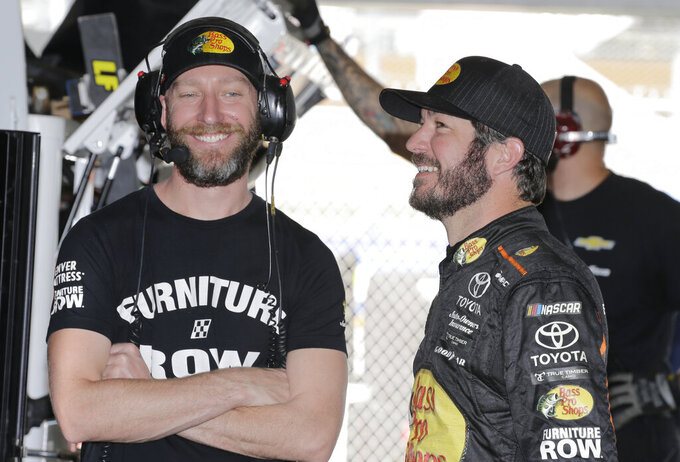 CHARLOTTE, N.C. (AP) — Cole Pearn, considered one of the top crew chiefs in NASCAR, is leaving the sport to spend more time with his family.

Pearn won the 2017 NASCAR championship with Martin Truex Jr. and guided Truex to the title race in four of their five years together, including the last three seasons. Truex was the championship runner-up the last two years, including last month when a rare mistake in the pits cost the No. 19 team a shot at the title.

The team put tires on the wrong side of Truex's car during a routine stop and it put him a lap down — too much to overcome to catch Joe Gibbs Racing teammate Kyle Busch. Truex finished second to Busch in the race, and Busch won the title for Gibbs.

Pearn and Truex joined JGR this year when Furniture Row Racing closed shop in suburban Denver. The move required Pearn, a Canadian, to relocate from Colorado to North Carolina, and he made no secret of the outdoor time and activities he missed with his family.

“At the end of the day, I really want to spend time with my family and actually see my kids grow up," Pearn said Monday. "Being on the road, you are away from home so much and miss a lot of time with your family. I don’t want to miss that time anymore. ....I don’t want to look back in 20 years and think about everything I missed with my wife and kids while I was gone. They are what is most important to me.”

Pearn and Truex had a series-best seven wins this season. In five years together, the duo qualified for the title-deciding finale four times. They won 23 races since the start of 2016, best among all driver-crew chief combos over that time.

“I cannot say enough good things about Cole and what he has meant for my career,” Truex said. “I appreciate his hard work and dedication to our race team over the past six years going back to when he was my engineer at Furniture Row. Our friendship is what matters most to me and I’m happy that he’s doing what’s best for him and his family.”

Pearn was an anomaly in NASCAR in that he refused to wear a firesuit atop the pit box — he quipped he had no plans to go over the wall and work on the car during a race — and instead donned a team T-shirt or hooded sweatshirt during races.

His politics also have a liberal slant and after joining Gibbs this season, he'd occasionally offer an opinion on Twitter that would later be deleted, perhaps because of backlash in the conservative sport. Eventually, he limited his social media to posts about victories or his family.

Gibbs did not immediately name a new crew chief for Truex.