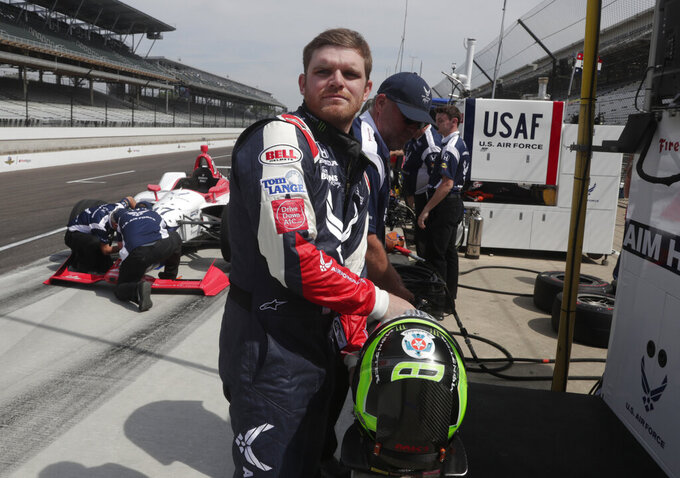 FILE - In this May 17, 2018, file photo, Conor Daly prepares to drive during a practice session for the IndyCar Indianapolis 500 auto race at Indianapolis Motor Speedway in Indianapolis. Andretti Autosport will field a five-car all-American lineup for the Indianapolis 500. Daly snagged the fifth seat with The Air Force as his sponsor. (AP Photo/Michael Conroy, File)

Conor Daly has been chasing sponsorship money all across the country in a nonstop effort to continue his racing career. He's willing to drive anything, but the Indianapolis 500 is the priority.

The lean sponsorship landscape has pushed Daly and other drivers to the fringe of motorsports in that they can't land rides unless they bring a significant portion of the funding. But Daly shouldn't be such a hard sale: He's American, an Indianapolis native, he just turned 27 and has name recognition beyond IndyCar from one season on "The Amazing Race" reality show.

None if it has been enough to land him that one big deep-pocketed sponsor that can jump-start his career.

Daly did, however, impress the Air Force during a partnership at last year's Indy 500. Daly finished 21st driving for a smaller team and the Air Force received enough bang for its buck that it wanted to partner with Daly again this May. Only this time the Air Force wanted Daly with a team that could win, and it landed him the fifth seat in the Andretti Autosport lineup.

"If you want to be with a team that can win, then Andretti, absolutely, that's the best choice, for sure," Daly told The Associated Press.

He gives the team an all-American roster, rounding out the lineup with Marco Andretti, former Indy 500 winners Alexander Rossi and Ryan Hunter-Reay, and Zach Veach.

It will be Daly's sixth attempt to make the 500 but first with one of the series' elite organizations. The Andretti cars are consistently in contention and among the most watched during the buildup to the 500 because of the storied family organization. This year marks the 50th anniversary of Mario Andretti's victory, the only win for an Andretti.

Daly is close friends with most of the Andretti lineup and raced Rossi in Europe, but the two have been teammates only once before, during their fourth-place finish last year on the reality show.

The all-American element to the Andretti team is a genius marketing move that could have longer financial gains for Daly and the organization. The Air Force already has signed as an associate partner for the entire Andretti lineup during the full IndyCar season, and Daly was popular enough for them last year to warrant a return to Indy with him.

That alone is considered one of Daly's biggest victories.

"No one is being handing rides, this was a ride that was created through great partnerships," Daly said. "The system, the financials, nothing is going to change in the immediate future so you just have got to do your best with what you've got. I do feel good about the money and sponsors we've had the last few years because it is hard and I am starting with nothing."

The business model in motorsports has shifted in that almost everyone besides the very top stars need to bring some sort of funding to a team to secure a ride.

Daly ran four IndyCar races last season and one Xfinity Series race on a NASCAR road course. He ran the full IndyCar season in 2017 and, acting as his own agent, learned that most potential sponsors care only about his success in the Indy 500.

"My ideal goal is to do more races," he said. "I don't want to just do Indy, but that's all I've got so far and it makes it a little bit weird that you show up to the biggest race in the world having not raced at all in an Indy car since last year."

His priority is to seize this chance with Andretti and deliver the kind of showing he can parlay into more races. Until that happens, he'll be readying for the May 26 race by trying to find more work.

"I have four other deals I am working on, some of this year, some is already for 2020, but that's all I do, all day long I pound around on my laptop and take random meetings," Daly said. "I'm grateful for this opportunity with Andretti to show I'm a worthy investment."