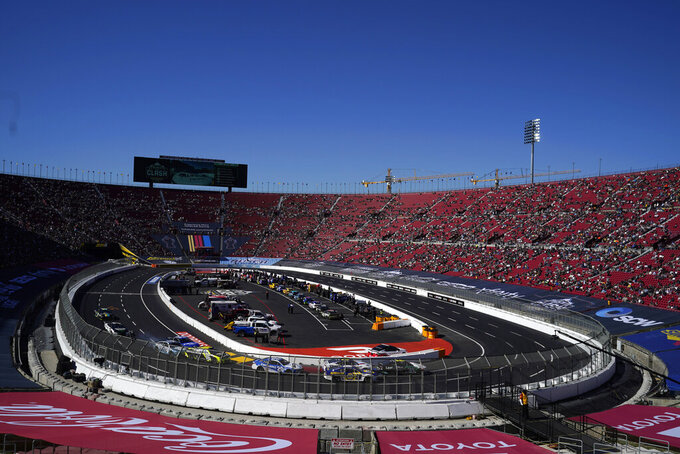 And a race packaged into a six-hour entertainment extravaganza? Well, that sounded like something NASCAR could and probably would botch.

But it was love at first sight when NASCAR opened the track to its finnicky stars. They looked around and saw a temporary .25-mile oval made of smooth black asphalt, surrounded by a sea of red in one of the most hallowed venues in sports.

Just like that, The Clash was a smashing success.

Before a single lap had been turned. Before Ice Cube played a halftime show. Before Joey Logano won Sunday's exhibition race, and then hurried back to North Carolina for Monday's planned delivery of his third child.

A change of scenery and a break from tradition was all it took to energize NASCAR ahead of its upcoming season; Daytona International Speedway opens next Monday night for preparations for the Feb. 21 Daytona 500.

“I think a lot of us in the industry forgot that we’re in a pretty cool sport,” said Steve O'Donnell, NASCAR's chief racing development officer. "This event delivered. It was important for us to come out here and look like we’re having fun, even if we weren’t. That wasn’t the case. I think everybody was really enthusiastic, ready to go, they wanted to win this race. I think that showed.”

It was a big risk to move the 44th running of The Clash from Daytona, its only home since the “preseason” race debuted in 1979. The event opened Speedweeks and was a warmup — sometimes a sneak peek — for the Daytona 500.

Traditional fans were not pleased to see NASCAR, yet again, breaking from its monotonous schedule and abandoning a Daytona rite of passage. And fans of grassroots racing were angry that NASCAR chose to dump seven figures into building a temporary track inside a football stadium rather than go to one of the many historic short tracks throughout the United States.

“If this didn’t work,” said runner-up Kyle Busch, "it was going to be ugly.”

There are things that could have gone wrong. The track could have fallen apart, the tight quarter-mile could have created a caution-filled wreck fest, and even worse, the first event for NASCAR's long-awaited Next Gen racecar could have been an embarrassing flop.

But everything was fine.

When two different drivers cracked the retaining interior walls in collisions, NASCAR was able to make fast repairs that didn't significantly delay the racing. The race format worked, the on-track action was well-paced, and Pitbull and Ice Cube both performed for the sun-soaked crowd — including a rowdy USC student section.

The biggest win was in how little discussion centered on NASCAR's new car.

The Next Gen has been a laborious process of designing a new car with collaboration throughout the industry. The car is supposed to even the playing field, reduce team costs and give manufacturers greater brand identity.

The debut of the Next Gen was delayed a year by the pandemic, and drivers have argued with NASCAR over the car's performance during winter testing. The Clash was the first real racing for the Next Gen, and nobody was talking about its debut or the style changes that nearly led to a fan revolt when the placement of the car numbers were moved forward on the body.

“The Next Gen car really wasn’t a story, and I’m happy for that,” O'Donnell said. “All in all, a really successful debut for the car.”

Much of the credit for the Coliseum race has been given to 30-year-old Ben Kennedy, the great-grandson of NASCAR's founder and a former driver who holds a degree in sports management from the University of Florida. Kennedy is NASCAR's senior vice president of strategy and innovation and led last year's overhaul of a schedule that raced the same venues on the same weekends year after year with little variation.

It was Kennedy's idea to race at the Coliseum and push NASCAR past its comfortable boundaries. This year's Clash was a blank sheet of paper in which NASCAR could do anything it wanted, including an unprecedented halftime for Ice Cube's six-minute set.

Now the same drivers who expected NASCAR to fail on Sunday have openly wondered if more events can be like The Clash? If they can build a track inside the Coliseum, where else can they go? Yankee Stadium? Wembley? Swap Talladega Superspeedway for a stop at Bryant-Denny Stadium in Tuscaloosa?

Kennedy was asked about future visions the entire weekend but wanted to wait to see the end results. He also focused on NASCAR's return to Southern California for the first time since early 2020, when its annual stop in Fontana was held just weeks before the start of the pandemic.

NASCAR comes back at the end of this month to race in Fontana, a venue scheduled to be converted into a short track but also delayed by the pandemic. Busch sad the success of The Clash eliminated any doubt the conversion project at Fontana will now move forward.

But The Clash itself? It could be in Los Angeles again next season — it would be insane now for NASCAR to return the race to Daytona — but NASCAR now has the courage to try something even wilder.

For Logano, the race “proved that, hey, we can race anywhere."

“That’s the biggest win for the future of our sport," he said.