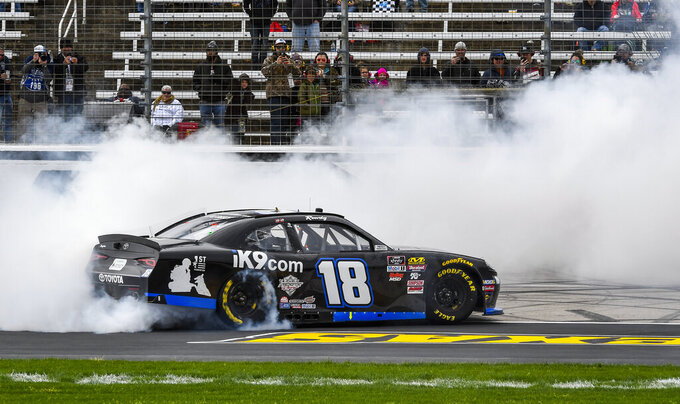 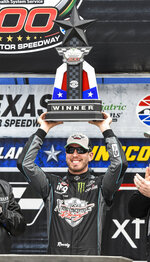 FORT WORTH, Texas (AP) — Kyle Busch has set himself up for the chance at a Texas three-step.

Busch rocketed ahead of Tyler Reddick on the final restart with six laps remaining and won the NASCAR Xfinity race Saturday, setting up the possibility of a tripleheader weekend sweep in Texas.

While Busch will be going for his third career NASCAR tripleheader sweep — he did it at Bristol in 2010 and 2017 — he missed out on the chance for one at his home track in Las Vegas four weeks ago with a third-place Cup finish after winning the Xfinity and Truck Series races. He missed sweep chances at Texas in 2009 and 2014.

"I've been close before. I don't know how many times I've won two of the three. It's been too many," Busch said. "So certainly to have the opportunity to go after another one here it's good. It means a lot."

Busch led 33 of the 200 laps, won for the third time in four Xfinity starts this season and got his 95th career victory in the series. He extended his NASCAR record to 203 wins overall, nine coming in 14 NASCAR starts this year.

He got his 55th career Truck Series win Friday night at Texas, and will start 16th for Sunday's Cup race at the 1 1/2-mile track where he won last spring. His 53 career Cup wins include three in Texas.

After the ninth and final caution Saturday, Busch and Xfinity Series points leader Reddick both went to pit road for fuel only. Busch beat him off pit road, created separation from the field by the backstretch after the restart and cruised to the checkered flag.

"That's what won us the race, being first and being in control of the restart, go where I wanted to," Busch said. "I got a good launch and was able to get to single file before we got to Turn 1. That was the best thing for us all day."

Polesitter Christopher Bell led a race-high 127 laps, recovering from a speeding penalty on pit road after he led all 48 laps during the first stage. Bell finished third, ahead of Chase Briscoe and Jeb Burton.

Reddick, Bell, Briscoe and sixth-place finisher Michael Annett qualified for the first Dash 4 Cash for the Xfinity championship contenders. The top finisher of that quartet next week at Bristol will earn a $100,000 bonus.