Busch looks to rebound as NASCAR playoffs move to Richmond 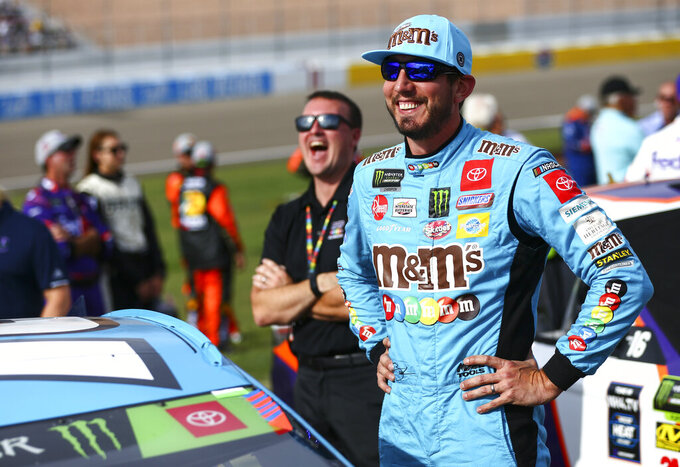 FILE - In this Sunday, Sept. 15, 2019, file photo ,Kyle Busch prepares for a NASCAR Cup Series auto race at Las Vegas Motor Speedway in Las Vegas, Nev. The NASCAR playoffs didn't start the way Busch wanted, with him relegated to a middle-of-the-pack finish at Las Vegas that dropped him to fourth in the championship race. Now, though, the series arrives at Richmond Raceway, where no one else in the field can touch his six career victories. (AP Photo/Chase Stevens, File)

RICHMOND, Va. (AP) — The NASCAR playoffs didn't start the way Kyle Busch wanted. An early swipe of the wall at Las Vegas and slow lapped traffic relegated him to a middle-of-the-pack finish that dropped him from first to fourth in the championship race.

Now, the series has moved to Richmond Raceway, where no one else in the field can touch Busch's six career victories, but also where Joe Gibbs Racing teammate Martin Truex Jr. won in the spring and teammate Denny Hamlin has won three times.

Busch ran into the back of Garrett Smithley after working his way back up to fourth place, then faded to a 19th-place finish at Las Vegas. He lashed out at Smithley afterward, but said he was over it within about 12 hours.

"Richmond's Richmond. Vegas is Vegas. It's done and over with," he said Friday. "That's past. We're moving on."

Busch and the Gibbs organization have dominated NASCAR's top series all season, winning 14 of 27 races, and work well together. Truex has won five times, Busch and Hamlin have won four each and Erik Jones has won once.

"We share everything, the teams, the crew chiefs, the drivers," Truex said Friday. "We share everything so basically we're teammates as good as we can be, then once the race starts on Saturday night, that's when it's every team for themselves. You race as hard against your teammates, almost, I guess, as hard as you race everybody else."

On a team having so much success, that cooperation is critical, Hamlin said.

"I think it's in all of our best interest to share everything as much as we can and feed off of each other," he said. "Usually, when someone has good information it relates to the other and the other people can put that in their car and then when they find something better yet, that goes back to the other guy. ... It's just a circle of trust."

Truex won last week and leads the championship race, and Busch fell 19 points off the pace. Hamlin is seventh and Jones holds down the final spot in the 16-driver playoffs with two races left before the field is cut to the top 12.

Just above Jones in the championship race is Clint Bowyer, who started first last week but finished 28th.

The week since has been difficult for Bowyer, who spent time in Kansas after the death of his grandmother.

"I've had a long week and really haven't had a chance to think about where we're at or what's coming," Bowyer said. "I knew Richmond was coming. I knew we have a good base package here. I knew that we needed to get here and figure it out from there. I was confident with what we were going to show up with, confident in our equipment, our fundamentals.

"The silver lining is I do really like this track," he continued. "I wish we had five of these around the country, you know. I wish a lot of those mile-and-a-half tracks were more this size for me, my driving style, everything else.

"It puts a smile on my face every time I walk in the gate here."

A bad start to the playoffs, Bowyer said, doesn't change the pressure he feels to follow up with success.