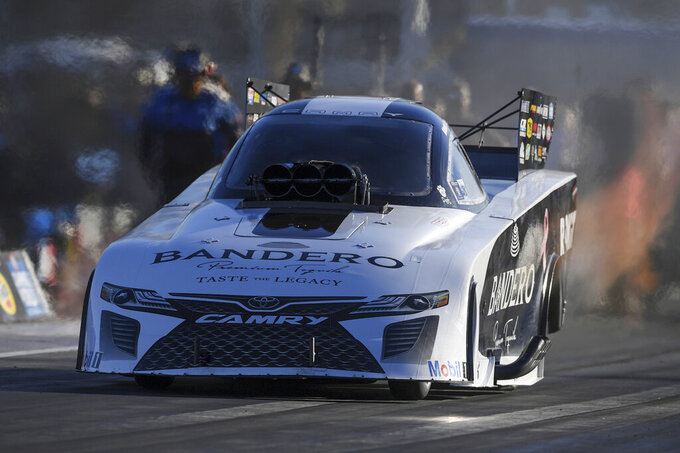 In this photo provided by the NHRA, Alexis DeJoria drives in Funny Car qualifying Friday, Oct. 29, 2021, at the Dodge//SRT NHRA Nationals drag races at The Strip at Las Vegas Motor Speedway in Las Vegas. (Jerry Foss/NHRA via AP)

LAS VEGAS (AP) — Brittany Force put herself in position for her 12th No. 1 qualifier of the season Friday in the Dodge//SRT NHRA Nationals at The Strip at Las Vegas Motor Speedway.

Alexis DeJoria led in Funny Car, Kyle Koretsky in Pro Stock and Steve Johnson in Pro Stock Motorcycle in the sixth of seven events in the Countdown to the Championship playoffs. DeJoria had a 3.896 at 327.03 in a Toyota Camry, Koretsky ran a 6.667 at 205.10 in a Chevrolet Camaro, and Johnson had a 6.848 at 196.24 on a Suzuki.

Qualifying will conclude Saturday, with final eliminations set for Sunday.