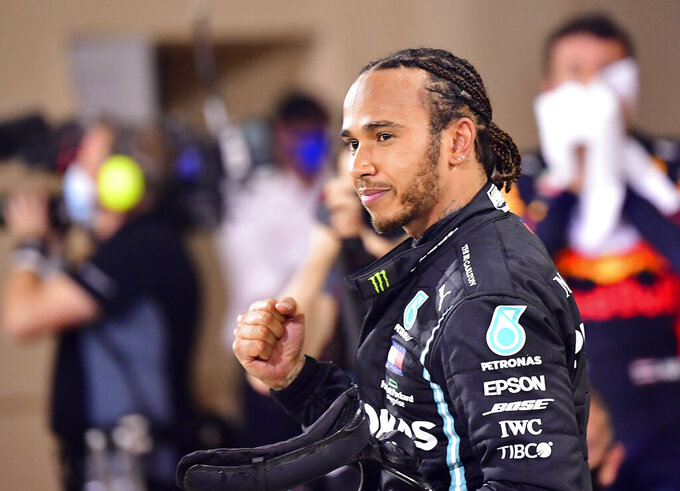 FILE - In this Sunday, Nov. 29, 2020 file photo, Mercedes driver Lewis Hamilton of Britain celebrates after winning the Formula One race in Bahrain International Circuit in Sakhir, Bahrain. Lewis Hamilton is chasing an eighth Formula One title to stand alone among racing greats. The season starts Sunday March 28, 2021 with the Bahrain Grand Prix and ends in December 2021 at Abu Dhabi. Hamilton might see another successful season as the perfect time to walk away from F1. (Giuseppe Cacace/Pool via AP, File)

If he ever wants to really challenge for the Formula One championship, he realized, he needs a stronger mindset.

“I’ve realized that a lot of that is the mental side of things,” Bottas said. “I’m trying to be mentally at my best, trying to find the right way of approaching every single Grand Prix weekend, (finding) more of the ‘flow’ state.”

When Nico Rosberg wrestled the F1 title from his then-teammate Hamilton after an intense battle in 2016, he put much of his success down to mental strength. Bottas has not mounted a serious challenge in the same way.

Bottas started the past two seasons brightly with victories, only for his challenges to quickly fade as Hamilton imposed his superiority. Frustration got the better of Bottas and chipped away at his composure on race days, leading to some sloppy mistakes.

“I need to be self-honest with everything and try to find a good way and (have a) kind of ‘happy-head’ for every single Grand Prix. That’s the tricky part,” he said. “There’s never been an athlete who’s been completely 100% of their performance capacity in every single event they’ve done. But how to get there more often? That’s the question.”

Hamilton found the answer many years ago, and has been on a roll ever since.

After his first F1 title with Mercedes in 2014 — his second overall — Hamilton has won the championship every season except for 2016, when Rosberg beat him in a tense campaign that strained a friendship that went back to their teenage karting days.

After losing the 2015 campaign with three races to go, Rosberg hit back by winning the last three and the first four the next season to show he meant business. At the end of 2016, the German driver put together a run of four wins in five races to withstand Hamilton's superb comeback, taking an intense season to a final-day decider where he held firm under the Abu Dhabi floodlights.

Bottas has never been able to match Hamilton's consistency.

Sometimes, “I perform on the level that I want to, but then there are times that for some reason I don’t, and I feel like I (can’t) get 100% out of myself,” the 31-year-old Finn said. "I put too much pressure on myself. There (have) been times that I’ve taken too much pressure from outside.”

When he won the Australian GP in 2019 and the Russian GP last September, Bottas marked the victories with the same angry message over his radio, aiming an expletive at his critics.

But by reacting that way he also showed everyone — including the ice-cool Hamilton — that criticism gnawed away at him.

And he soon gave those critics more fodder. Because after his victory in Sochi he did not win any of the next seven races. Instead, his form deteriorated with three podiums, two eighth places, a 14th place and a retirement.

He finished 124 points behind Hamilton — considerably worse than in 2019 when he was 87 off the pace — despite there being four fewer races last season.

“I don’t want to leave any ‘What ifs’ after this year," Bottas said. “What would be more disappointing is if I look back and realize things that I could have done better, or I should have put more effort."

Hamilton is chasing a record eighth title to move ahead of Michael Schumacher and stand alone among F1 greats. Hamilton has won 95 races and 98 pole positions — both F1 records — while Bottas has nine wins and 16 poles.

In what could be his final season with Mercedes, Bottas intends to end Hamilton's dominance.

“Going into this new year starting from fresh and with a new page, absolutely I believe that I can fight for the title,” Bottas said.

He may never get a better chance.