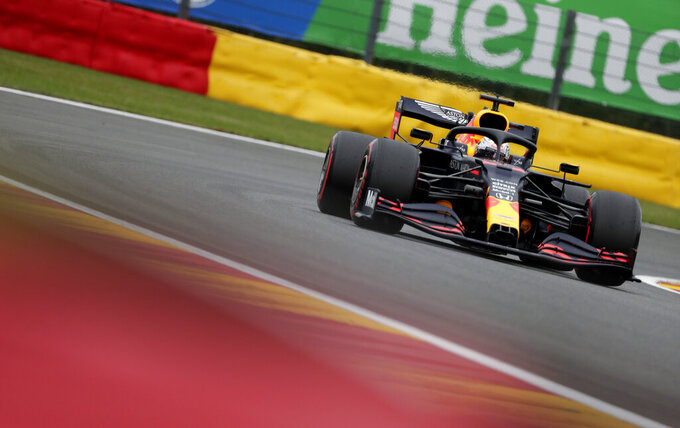 Red Bull driver Max Verstappen of the Netherlands steers his car during the first practice session prior to the Formula One Grand Prix at the Spa-Francorchamps racetrack in Spa, Belgium Friday, Aug. 28, 2020. (Stephanie Lecocq, Pool via AP)

SPA-FRANCORCHAMPS, Belgium (AP) — Valtteri Bottas posted the fastest time in the first practice for the Belgian Grand Prix on Friday.

The Finnish driver's best lap was .069 seconds quicker than his Mercedes teammate Lewis Hamilton, who leads the championship after winning four of the first six races.

In gloomy and overcast conditions, Red Bull driver Max Verstappen was .081 behind Bottas in third place. They have won one race each this season.

Ferrari again struggled with Charles Leclerc and Sebastian Vettel not among the 10 fastest drivers.

There is a second practice later Friday at the 7-kilometer (4.3-mile) track nestled in the Ardennes forest.