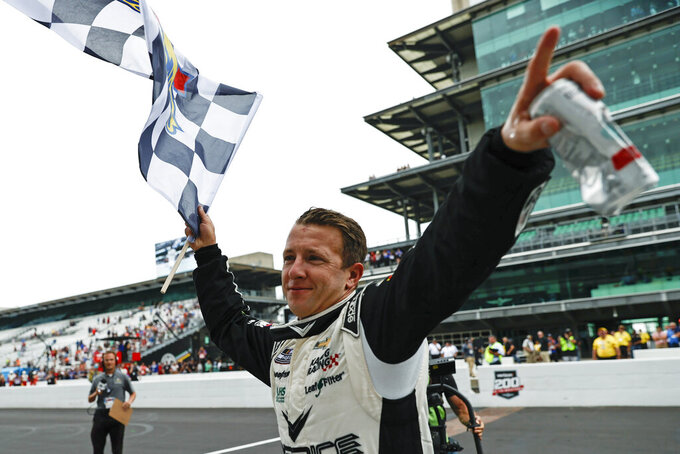 Last race: A,J. Allmendinger grabbed a late lead and won on the Indianapolis road course after a wild, chaotic finish.

Fast facts: Kyle Larson tops the standings, 22 points ahead of Denny Hamlin. ... Larson's finish at Indy was his 13th top-five run in 24 races. ... Hamlin's Joe Gibbs Racing teammate Kyle Busch is third in points, but a distant 157 behind. William Byron is fourth, 163 back, and defending series champion Chase Elliott is 179 behind. ... Hamlin did clinch a berth in the playoffs because race winner Allmendinger is not eligible for the playoffs.

Last race: Austin Cindric led 29 of 62 laps and won on the road course at Indianapolis for his series-best fifth victory of the season.

Fast facts: Cindric, who drives for Team Penske, was greeted in victory lane by his father, Tim, the president of Team Penske. Team owner Roger Penske owns the track at Indianapolis. ... Riley Herbst finished eighth to move into the 12th and final playoff spot with five races remaining to set the field. ... AJ Allmendinger finished second and is second in points, 82 behind Cindric. Daniel Hemric is third, 159 back.

Last race: Austin Hill won at Watkins Glen for his second consecutive victory in the series.

Fast facts: This race marks the start of the 10-driver playoffs. ... Series regulars have won 11 of the 15 races so far this season, led by points leader John Hunter Nemechek with five wins. ... Nemechek leads Hill by 28 points, Ben Rhodes by 30, Todd Gilliland by 34 and Creed by 38. Those five are the only series regulars with victories. ... The playoff contenders are separated by just 48 points as the points were reset for the postseason.

Schedule update: The Japanese Grand Prix, scheduled for Oct. 10 in Suzuka, has been canceled because of the coronavirus pandemic.

Last race: Will Power led 56 of 85 laps and won on the road course at Indianapolis, his 38th career IndyCar victory.

Fast facts: Power, the 2014 IndyCar champion, also won twice in CART, giving him 40 career victories. The triumph was his fifth on the road course and sixth in Indianapolis. He also won the 2018 Indy 500. ... With four scheduled races remaining, Alex Palou leads Pato O'Ward by 21 points in the standings with Dixon 34 back and Newgarden 55 behind. ... Palou was running fourth with 17 laps to go last weekend until a blown engine relegated him to 27th out of 28 cars.