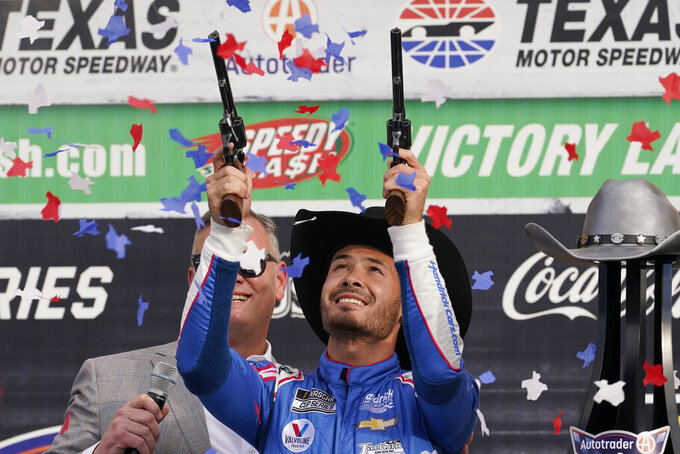 Last race: Kyle Larson clinched a spot in the championship-deciding season finale with a win in Texas, his series-best eighth of the season.

Fast facts: Larson had six career victories coming into this season. He will be contending for the championship in the season finale for the first time. ... Ryan Blaney moved into second in the points race, 51 behind, with Denny Hamlin third, 59 back. Kyle Busch (-60) and Chase Elliott (-68) round out the top five. ... Logano crashed out of the race early and will likely have to win one of the next two races to make the finale. He and Hamlin share the lead among active drivers with three wins apiece at Kansas.

Fast facts: AJ Allmendinger's lead over defending series champion Austin Cindric went from six points to four at Texas. Justin Allgaier is 26 points back, Noah Gragson 28 and Daniel Hemric 30. ... Nemechek became the fourth driver to win in the No. 54 for Joe Gibbs Racing this year, joining Kyle Busch, Ty Gibbs and Christopher Bell. ... Nemechek went from the lead to 18th position after a team member was penalized on a pit stop with 51 laps to go.

Track: Circuit of the Americas