Allmendingers ready to reign as 1st family of racing, runway 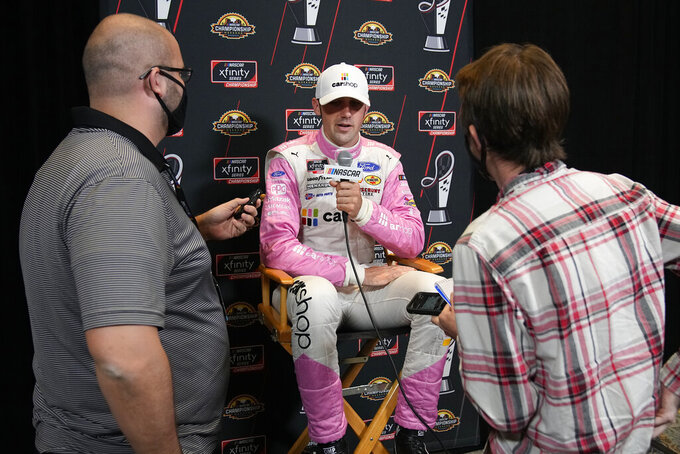 AVONDALE, Ariz. (AP) — Pack the firesuit and the swimsuit, the Allmendingers are ready to reign as the first family of racing and the runway.

Sure, AJ Allmendinger would love to sashay out of Phoenix Raceway with his first career NASCAR championship and cap a season of a lifetime with the biggest prize in the Xfinity Series.

Only thing is, he’s not even trying to win the biggest prize in his own house. Allmendinger’s wife, Tara, is the reigning Mrs. North Carolina and she’ll get her shot to win one for America at the Nov. 20 Mrs. America pageant in Las Vegas. But first, the family prelims.

“In the Allmendinger household, this weekend is the small thing,” Allmendinger said. “This is small potatoes right here.”

The 39-year-old Allmendinger spent his first full season in the second-tier developmental series that boasts “names are made here” by finally making a name for himself as a championship contender. He will race in Saturday's finale against defending series champion Austin Cindric, Noah Gragson and Daniel Hemric, with the first to finish crowned this season’s champion.

Allmendinger’s career rebirth comes after he lost his passion for NASCAR over a Cup Series career driving for underfunded teams. He won just one Cup race over 13 years and 371 starts. He basically walked away after the 2018 season and made only five Xfinity starts in semi-retirement in 2019. He made 11 starts for Kaulig Racing a season ago bt this year went all in with team owner Matt Kaulig and his crew.

His decision changed the arc of his career and has him positioned 200 miles from a title.

“With the year that we had, my ultimate goal was to try to make the final four,” Allmendinger said. “I was probably more nervous last week then I probably will be on Saturday. With the way this championship works now, it comes down to whoever is best out of the four cars of that day. I just looked at it that with the year that we had, it would be a disappointment if we didn’t even have a shot to go for the championship.”

There was little worry: Allmendinger clinched a berth on points at the end of the second stage at Martinsville.

“Of course I want to win a championship in NASCAR. I’ve been here for 15 years trying to do it,” he said. “Hell, the celebration if we win it may be better than anybody’s you ever seen. You may never hear from us again, I don’t know. But if it doesn’t work out on Saturday, it doesn’t really change my life. But what happened this year, that’s stuff that two years ago I never dreamed of.”

While not a factor in the finale, that dream season included kissing the bricks at Indy when the road course ringer snagged a Cup win at Indianapolis. He plans to run 12 to 15 Cup races next season for Kaulig.

Tara wears her Mrs. North Carolina sash with pride as she stands besides her husband on the starting grid, and even gets behind the camera as she did Thursday night when she posted an Instagram live video as Allmendinger and his buddies tipped over a table hockey game and used makeshift tools to dislodge a stuck puck.

The 23-year-old Cindric already has won an Xfinity title and will try to defend it Saturday before he moves to Cup to drive the flagship No. 2 for Team Penske. Cindric won seven races this year and Allmendinger and Cindric had tense battles for the checkered flag this season, notably when the rivals crashed each other as the cars crossed the finish line at Bristol. Allmendinger’s fourth win of the season was claimed because his Chevrolet was sliding ahead of Cindric’s across the line.

The dark horse just may be Gragson, the 23-year-old driver for JR Motorsports. The scruffy Gragson left the razor behind for the playoffs as the Golden Knights hockey fan tried to emulate the superstitious playoffs beards sported in the NHL. Gragson has not shaved since the playoffs started.

“I wish I could grow a good one,” said Gragson, who won at Martinsville last weekend to race his way into the final four.

The 30-year-old Hemric failed to win a race this season for Joe Gibbs Racing and advanced to the championship round by only six points. He is the first JGR driver to open championship weekend — JGR drivers Denny Hamlin and Martin Truex Jr. race for the title against Hendrick Motorsports drivers Chase Elliott and Kyle Larson in Sunday’s NASCAR Cup Series championship race.