All for the Gram: Rahal cars briefly idled after photo shoot 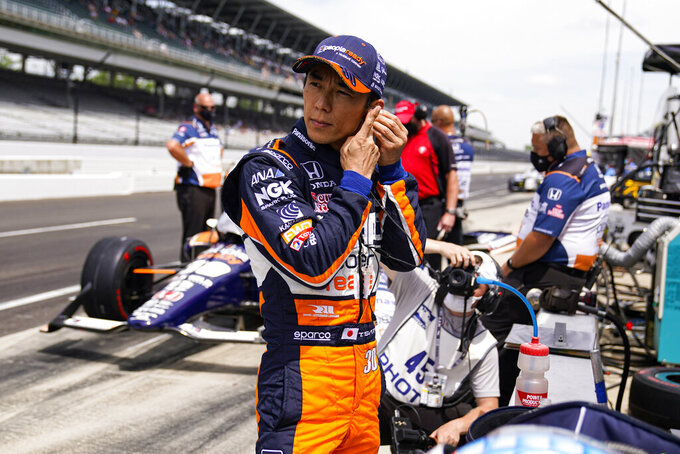 Takuma Sato, of Japan, prepares to drive during practice for the Indianapolis 500 auto race at Indianapolis Motor Speedway in Indianapolis, Friday, May 21, 2021. (AP Photo/Michael Conroy)

INDIANAPOLIS (AP) — Photogate spilled over to a second day at Indianapolis Motor Speedway when all three of Bobby Rahal's cars were idled on pit lane at the start of Friday's practice as punishment for their ill-timed effort to take a team picture on the famed speedway.

The punishment didn't seem to hold the trio back, though.

Two-time and defending race winner Takuma Sato, Graham Rahal and Santino Ferrucci, who crashed late Thursday and wore a brace on his leg Friday, were all fast enough once their penalty had been served.

The Rahal Letterman Lanigan cars were parked for the first 30 minutes of practice on the day IndyCar allows a horsepower boost so teams can get a feel for their speed ahead of Indianapolis 500 qualifying this weekend.

The punishment was doled out by IndyCar because Sato, Graham Rahal and Ferrucci attempted a three-side photo staging in the opening minute of Thursday's practice. The track at the time was open to all teams and Colton Herta hit the wall and bounced into Scott McLaughlin as he frantically tried to slow from 220 mph to about 100 mph to avoid a collision.

Bobby Rahal in hindsight said the team should have asked IndyCar for time to do the photo.

“We should have made a formal request. I don’t think there’s any question of that,” Bobby Rahal acknowledged Friday. “We’ll pay our penalty. We’ll take our medicine and go on.”

The missed practice time didn't disrupt RLL when they finally got on track. Graham Rahal had the second-fastest lap without the aid of a tow — that slipstream of air that flows off a leading car — behind overall leader on the day Alexander Rossi.

Sato ended the day eighth in best four-lap average, and Ferrucci was briefly near the top of the board a day after he became the first and only driver to crash this week at Indy. Some of his crew members worked through the night to repair his car.

“I’m so proud of these guys and so thankful the cars are as safe as they are," Ferrucci said. "I just had to forget about (the crash). It’s like that golf mentality. You hit a bad shot and just forget and move onto the next one.

“We had our setback yesterday. I slept it off, took some Tylenol when I woke up this morning and said, ‘We’re going to go fast.’”

Herta, the first driver this week to hit 240 mph, ended the session second behind Dixon. He was relieved the photoshoot flap a day earlier had not caused significant damage to his car and thinks he's in position for a starting spot in the first three rows of the May 30 race.

Rahal never intended to cause a controversy.

Bobby Rahal thought he was copying what Team Penske had done two days earlier when its four cars staged a photo as soon as the track opened. But the Penske shoot was during a scheduled five-minute period of non-competitive laps and is part of a longstanding team tradition for owner Roger Penske.

Penske no longer oversees the day-to-day operations of the race team, a role he relinquished after his January, 2020 purchase of the Indianapolis Motor Speedway and IndyCar Series. But the owner of a record 18-winning Indy 500 cars wants those Team Penske cars first onto the track every May — a streak long enough for everyone involved to understand how to execute the photograph.

“What we did on the first day is something we’ve done every single year here, or we’ve at least attempted to,” said team president Tim Cindric. "It’s just a way to start May and something Roger has always taken a lot of pride in.

Even with the penalty, the Rahal cars still had more than five hours of practice time ahead of the two-day qualifying process that begins Saturday and decides the pole-winner Sunday. The team was already in a hole with Ferrucci, who crashed late Thursday and needed significant repairs to his car.

The team worked overnight to get it rebuilt and Ferrucci, who was cleared Friday morning by IndyCar to compete, was fast.

None of the drivers seemed bothered by the lost track time.

“I think there’s nothing that will hurt us, to be honest,” Sato, the two-time and defending winner, said. “Maybe we have a little bit longer lunchtime. But designing a good program, that’s what’s important.”