Alex Zanardi takes center stage as he wheels around Daytona 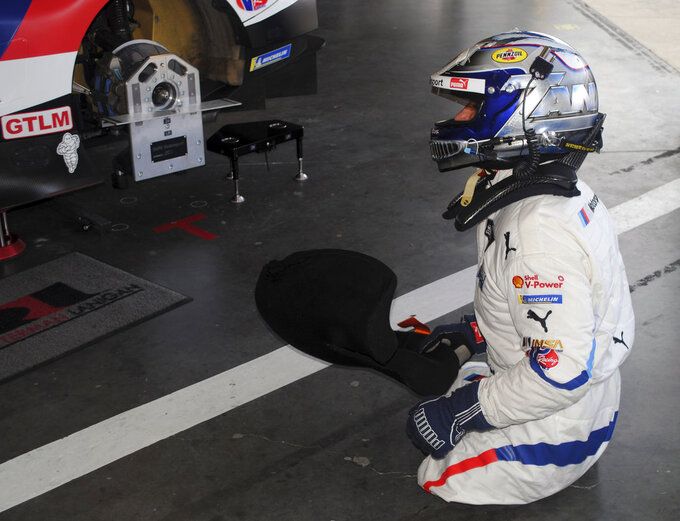 Alex Zanardi is shown in the garage at Daytona International Speedway in Daytona Beach, Fla., Friday, Jan. 4, 2018, where he is preparing for the Rolex 24, an endurance race at Daytona in late January. Zanardi is still racing 17 years after both his legs were severed in a crash. The Italian is now behind the wheel of a BMW that has been customized for Zanardi to race without his prosthetic legs. (AP Photo/Mark Long)

DAYTONA BEACH, Fla. (AP) — Alex Zanardi popped out of his wheelchair and onto the concrete garage floor to await his turn to climb into the race car. He pushed his way toward the car, then lifted himself into the cockpit to practice a driver change as seamless as any done by his competitors.

It was more evidence of the remarkable resilience Zanardi has shown since his legs were severed in a 2001 accident.

The beloved Italian is scheduled to race in the Rolex 24 at Daytona later this month, his first event in North America since before the fateful Sept. 15, 2001, crash at EuroSpeedway Lausitz in Klettwitz, Germany. His longtime partnership with BMW led to the development of a steering wheel with levers and paddles for Zanardi to shift gears, brake and accelerate without the use of his prosthetic legs.

"For one lap, with my prosthetics, I am faster when I can push the accelerator," Zanardi told The Associated Press on Friday. "But that's because I am doing so much with my hands and there are so many things to focus on. Once I am comfortable and have done a few laps, I am at the same pace as everyone else.

"The physical demand is also not as high without the prosthetic legs, so I am like an animal and can drive forever."

No one would expect anything less from Zanardi, who is now 52.

Few thought he was going to survive his horrific crash in which he lay bleeding and exposed on the race track in Germany late in an event already heavy with emotion. The CART Series had arrived in Germany prior to the Sept. 11 attacks, and with teams unable to return to the United States, the league was the only U.S-based sport to compete that weekend. While many have long cursed that entire event and how it ended with Zanardi's near-fatal crash, he never once complained.

"From that first day, not one time did Alex wonder why this awful thing happened to him. Instead, he accepted what happened, considered himself lucky to be alive and moved on determined to live every day to its fullest," said Chip Ganassi, who won 15 races and two CART championships with Zanardi. "I've never met a single person with the mental strength of that guy. He's super human."

Zanardi learned to walk with prosthetics he designed because he wasn't satisfied with the mobility of anything on the market. He took up hand cycling and won four gold medals in two Paralympics. He won his division in the New York City Marathon, and in the Ironman World Championship, where he used a handbike for the cycling portion and a wheelchair for the running portion, Zanardi finished 19th out of 247 in the 45-49 age group.

He also made a return to racing in European touring cars, satisfying his itch to get back in a car. Then BMW approached him about using new technology to build a special system to race a sports car and assumed Zanardi would want to try it at Le Mans, the most prestigious endurance race in the world.

"Daytona has some of the greatest fans in the world and many remember me from some of the things I've done in this wonderful country," Zanardi said. "I feel gifted for having the opportunity to compete in Daytona."

Fernando Alonso, a two-time Formula One champion, made his debut at Daytona last season and stole attention from every driver in the field. With Zanardi here this year and participating in Daytona's preseason testing this weekend, Alonso's return has been reduced to an afterthought and the Spaniard was one of the dozens of drivers who posed for photos with Zanardi in the garage.

"Are you a driver?" Zanardi jokingly asked Alonso. "Are you any good?"

Zanardi's positive outlook and supersized personality have enveloped the entire paddock and thrilled drivers eager to share the track with the legend credited with creating both celebratory victory burnouts and, along with then-teammate Jimmy Vasser, laying the foundation for Ganassi's championship organization.

"I can't go any further than a few feet then bump into another friend who, of course, I would love to go to dinner with," Zanardi said of his time so far at Daytona. "It's so great to be surrounded by so many friends. And many of the drivers, they say, 'Wow, Alex, it is so cool to be in the field with you.' But it's just because they think I will be behind them. When you get ahead of them, they aren't so happy. So I hope I can cool some of them down."

In a Daytona Beach restaurant with his wife and son this week, a stranger paid Zanardi's tab. Zanardi doesn't know why, just assumes the man "was evidently very grateful for me having done something" and if he saw the man again, vowed to hug him in appreciation.

He values every encounter, every experience, and is thrilled to be back in a car competing as if it was 17 years ago.

"It is just another chapter of a very fortunate life," Zanardi said. "I am very proud that for some reason my story from outside has been able to provide this type of emotions, feeling, inspiration. I bump into a lot of people that have similar problems that I have but less titles or magazines than I have, and they just challenge their adversity with the same tenacity, with the same enthusiasm, with the same will to succeed because life is one and you've got to take advantage.

"Otherwise the clock is ticking and you may not get the same opportunity again."