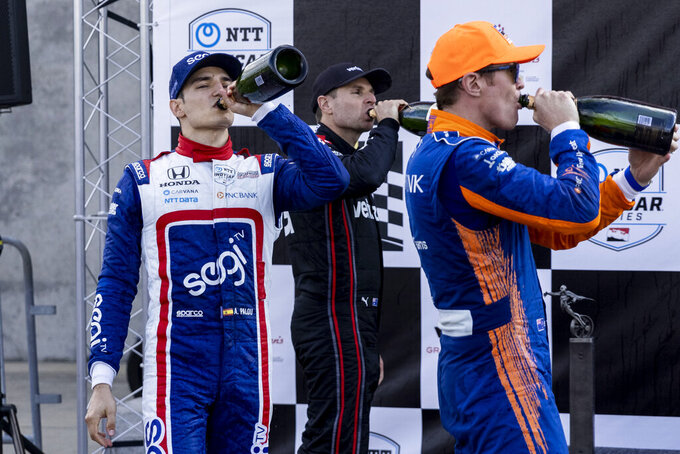 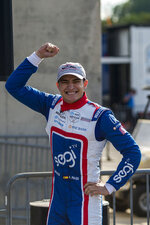 BIRMINGHAM, Ala. (AP) — Fernando Alonso is winless so far this season in Formula One. Same with Carlos Sainz.

Over in IndyCar, though, Alex Palou scored a victory for Spain.

Palou picked up his first career win — in his first race with Chip Ganassi Racing — by holding off a pair of series champions in Sunday's season-opening race at Barber Motorsports Park. The affable 24-year-old raised his fists in the air when he realized he'd reached victory lane before his fellow countrymen, who both raced 5,000 miles away in Italy earlier Sunday.

Palou is only the second Spaniard to win in the IndyCar Series, joining Oriol Servia, who won in 2005 at Montreal.

“It’s just amazing but I think it was part of the job,” he said. “When you are part of a big team and a successful team like Chip Ganassi, they give you all the tools. You have everything you need to win, and that’s why you see so many successful drivers.”

Palou then vowed to find the best fried chicken in Alabama to celebrate his achievement.

“I think that 80% of the drivers will tell you that after a race we need something that is not good for our body and that’s what I’m going to take tonight if I can, fried chicken. And fries. Lots of fries,” he said.

Palou used a two-stop strategy on the picturesque permanent road course to take control of the race but still had to hold off hard-charging Will Power and Ganassi teammate Scott Dixon over the closing laps. He beat Power by .4016 seconds to claim his first win in his first race driving for the storied Ganassi organization.

Dixon, the six-time and reigning IndyCar champion, finished third and was followed by pole-sitter Pato O'Ward, who was on a three-stop strategy.

Palou was the quieter offseason signing of the Ganassi organization, which also added seven-time NASCAR champion Jimmie Johnson to the four-car lineup. But Ganassi also took a gamble on Palou, who had spent one season driving for Dale Coyne Racing with one podium finish and one lap led all year.

He'd raced in Japan and Europe previously but introduced himself to Ganassi last August at the Indianapolis 500 in hopes of landing a job with an elite team.

“One of the dreams was to come here to the U.S. and once you are in the U.S. you want to be more and you want to be competitive, and to be competitive I wanted to be part of Chip,” Palou said. “I actually introduced myself to Chip at the Indy 500 because I wanted to be part of that team. I saw the spirit of the team. To be part of Chip Ganassi is 50 percent of another dream, which is to become a champion.”

Ganassi had been impressed through preseason testing and warned Palou would be a force this season.

“We did some testing over the winter and he was quick all day long at the tests, at one test he was quicker than Dixon,” Ganassi said. “So we knew the potential was there but you don't know where you are relative to other teams.”

Ganassi finished with three drivers in the top eight as Marcus Ericsson finished eighth, and Dixon has enjoyed this young new teammate who won't stop following him around both at the shop and at the race track.

“He’s actually one of those really nice guys. There has to be some underlying thing going on there somewhere. None of us have found it yet,” Dixon said. “It’s great to see somebody that’s easy to work with.

"Some drivers that we all get to work with can be somewhat difficult, but he is extremely willing and wanting to learn, asks a lot of questions, sends a lot of text messages to try and just do a better job. He’s been a real pleasure.”

Still most of the attention leading into the race was on the stacked rookie class of Johnson, former Formula One driver Romain Grosjean and three-time and defending Australian Supercars champion Scott McLaughlin.

Johnson, who at 45 is older than Palou's father, is learning every session and taking small gains. He celebrated not qualifying last on Saturday and was satisfied with his 19th-place finish Sunday.

Johnson had a developing blister on his hand after the race, avoided a first-lap crash and recovered from an early spin.

“Just a ton of learning experiences throughout the day,” Johnson said. “I just can't say too many times how different this is and how specialized this craft is.”

Grosjean, in his first race since a fiery November crash in Bahrain, finished 10th for Dale Coyne Racing. McLaughlin was 14th for Team Penske.

Rosenqvist, who briefly went airborne, also crashed in practice and had his qualifying lap disqualified, but was able to get his car back on track. Herta, Newgarden and Hunter-Reay were done without completing a single lap.

“I got loose coming over the hill and then touched the grass. I think once I touched the grass I'm basically sideways,” said Newgarden, the two-time series champion who was runner-up last season. “I feel really bad for anyone who got involved in that. Obviously my mess created a bigger mess, so any of the cars that got involved I'm really sorry because it was us that tipped it off.”

Herta, who crashed during Saturday practice, wasn't concerned about the hit he'd take in the championship fight.

“This sucks, man, and I'm ready to get out of here,” Herta said. “It's such a competitive year and guys are going to have bad races and guys aren't going to do well everywhere. It obviously sucks for us because now we're on the back foot but we have plenty of races left to get back in it.”

IndyCar races next Sunday on the streets of St. Petersburg, Florida, which is typically the season opener. It was the season finale last year and won by Newgarden.