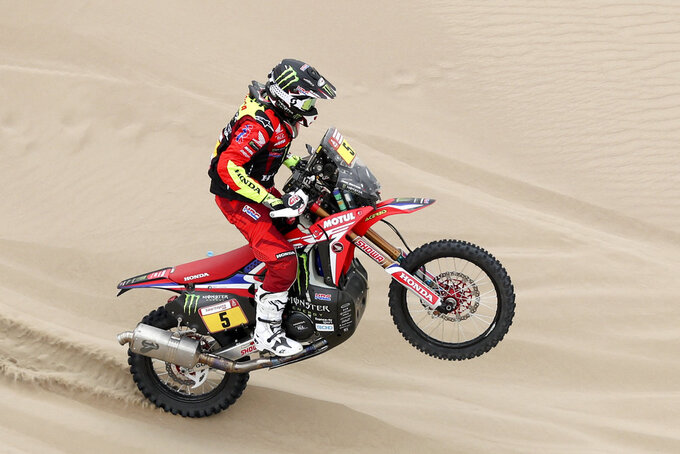 Joan Barreda of Spain rides his Honda motorbike during the first stage of the Dakar Rally between Lima and Pisco, Peru, Monday, Jan. 7, 2019. (AP Photo/Ricardo Mazalan)

LIMA, Peru (AP) — Nasser Al-Attiyah made a great start to winning a third Dakar Rally title when he won the opening stage by almost two minutes on Monday.

Al-Attiyah made light work of the 84-kilometer special on the dunes around Pisco along the Pacific coast.

Jakub Przygonski was third. The overall champion of the Cross-country Rallies World Cup is trying to become the first Polish winner of the Dakar.

Seven-time winner Stephane Peterhansel was three minutes back in seventh, and Sebastien Loeb was more than six minutes back.

Joan Barreda showed the focus of his buildup on being fit paid off when he won first motorbike stage by a minute from Pablo Quintanilla. Barreda's Honda teammate, Ricky Brabec, was third.

Barreda had to withdraw last year on the 11th stage while lying second overall because of knee and hand injuries.

This Dakar has been reduced to a 10-stage race on Peruvian sand, finishing in Lima on Jan. 17.